Insight Into the LGBT Mindset

Day and night, LGBT people are told how much we [Christians] hate and despise them, that Prop 8 in California was actually Prop Hate, that Chick-Fil-A serves “hate chicken” (this from the mayor of Washington, DC).

Is it any surprise, then, that a number of churches were vandalized after the Prop 8 vote in 2008 or that a Chick-Fil-A store had the words “tastes like hate” scrawled on its walls? And given the view that failure to affirm homosexuality is an act of hate, is it any surprise that in April of this year, a church in Seattle had its windows smashed by a group called Angry Queers? 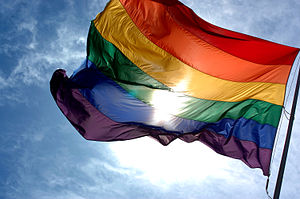 Rainbow flag flapping in the wind with blue skies and the sun. (Photo credit: Wikipedia)

The hard-core militants in the gay movement are those whom Brown is calling out and his message is compelling: They hate Christians and the message of Christ. When the Southern Poverty Law Center (SPLC) calls the Family Research Council, the target of the gay shooter last week, a “hate group”, it’s time to put some serious distance between them. Or so one would think. But no, one of the leading lights of LGBT, Wayne Besen, climbed on board with SPLC:

Wayne Besen, founding executive director of Truth Wins Out, was one of the signers of the joint LGBT statement condemning the FRC shooting on August 15th. One day later, he assured his readers that the FRC “loathes LGBT people with a special passion” and that the SPLC was “100% correct” in labeling the FRC a hate group…

Michael Brown, the author of this column at Townhall.com attended a gay pride event last year along with other Christians. Besen’s response is chilling:

Last year, at the gay pride event in Charlotte, about 400 Christians (including me) wore “God Has a Better Way” tee-shirts and handed out 2,500 bottles of water inscribed with “Jesus Loves You.” (For us, “the Jesus Revolution” means putting down swords of violence and hatred and picking up crosses of truth and love.)

In response, Besen wrote an article entitled, “Michael Brown Is an Anti-Gay Monster,” claiming that my “game is to try inciting followers to possible violence against LGBT people.” He stated, “I do strongly believe to my core that Brown’s ultimate goal is to create the conditions for a nasty physical clash,” claiming that, “The madman fully understands that he only has to create a hostile climate to inflame the most unstable of his thugs and they will eventually provoke the type of confrontation that this pathological monster deeply desires.”

What effect do such vitriolic, ugly, and hate-filled words have on an unstable gay reader? And how would that person recognize that there is not a grain of truth in Besen’s inflammatory words?

This is an insight to some of the gay mindset, and it isn’t pretty.

Chick-fil-A Christian Hate Hate Group Hate Speech LGBT
This entry was posted on Tuesday, August 21st, 2012 at 9:56 am and is filed under Politics, Religion. You can follow any responses to this entry through the RSS 2.0 feed. Both comments and pings are currently closed.
Many of the articles on Light from the Right first appeared on either The New American or the McAlvany Intelligence Advisor.