But if you need another reason to be upset, it turns out that Obamacare is going to be a very lucrative gig for a new crop of government bureaucrats. 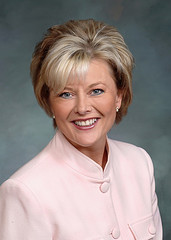 To some this may appear to be old news (Mitchell refers to a Pueblo Chieftain article dated last September) but for others it’s worth trotting out to illustrate the larger point: when the free market is circumvented, politicians get rich. Politicians create the gravy train and the bureaucrats hop on board.

This is from the Chieftain article:

A subcommittee of the board charged with establishing the exchange is considering a draft budget for its federal grant application that would create 24 positions and pay those employees a total of more than $3 million annually to manage the health care cooperative.

The average annual salary of a health benefits exchange employee would exceed $125,000 under the plan. The highest salaries would be paid to the CEO ($200,400) and chiefs of finance, operations and communications would make $165,000 each—just $7,200 less than the White House director of communications.

Now mind you, at the time these salaries were just in the “preliminary” stage, and Colorado lawmakers (even some Democrats!) were howling. Bill Cadman, Senator representing District 10 in Colorado Springs cried:

We have executive directors (of state departments) that are in charge of thousands of people here that make significantly less than that.

You’re setting up a pseudo-government agency that is offering a premium for salaries. I think the public’s going to be very cynical of this, and rightfully so. I am.

All states are required to set up these insurance exchanges. Amy Stephens made sure Colorado got to the head of the line by passing what is derisively called AmyCare. But these salaries are a bit too much even for Democrat Deb Gardner, representing Longmont:

At anybody’s first blush, these are really big salaries. We need to be protecting what we’re doing here in Colorado. We want to make sure we get good value for our money, and it’s hard to tell that that’s the case at this first glance.

Colorado Democrat Free Market Health Care Insurance Obamacare
This entry was posted on Monday, August 20th, 2012 at 1:52 pm and is filed under Constitution, Economics, Politics. You can follow any responses to this entry through the RSS 2.0 feed. Both comments and pings are currently closed.
Many of the articles on Light from the Right first appeared on either The New American or the McAlvany Intelligence Advisor.