Path to Prosperity: Better Than Nothing?

The era of bipartisan big government may have come to an end. Largely thanks to Rep. Paul Ryan and the fiscal blueprint he prepared as chairman of the House Budget Committee earlier this year, the GOP has begun climbing back on the wagon of fiscal sobriety and has shown at least some willingness to restrain the growth of government. 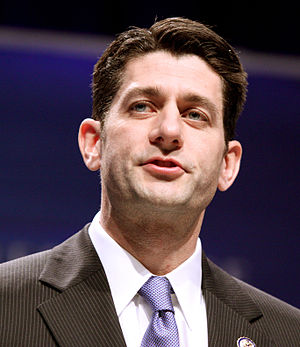 “Some willingness?” This frankly is about the best anyone can say about Ryan’s plan, the Path to Prosperity. My biggest problem is that nowhere does anyone, including Mitchell (who calls himself, unabashedly, “a top expert on tax reform and supply-side tax policy at the Cato Institute”), refer, at least once, to the Constitutional limitations on government. It’s as if that is now an irrelevant consideration, not even worth talking about.

Put another way, without Constitutional restraints, we’re left foundering in the sea, trying to make do the best we can with what we have: no fixed stars, no guidance, no direction, no signposts. Just bumbling along the best we can.

Here’s what I mean:

The most important headline about the Ryan budget is that it limits the growth rate of federal spending, with outlays increasing by an average of 3.1% annually over the next 10 years. …limiting spending so it grows by 3.1% per year, as Mr. Ryan proposes, quickly leads to less red ink. This is because federal tax revenues are projected by the House Budget Committee to increase 6.6% annually over the next 10 years if the House budget is approved (and this assumes the Bush tax cuts are made permanent).

Ah, that’s the goal: less red ink. Slow down the bus a little bit. But what’s the goal, the end point? How will we know we’ve succeeded? Is actual shrinkage of government even mentioned? Of course not. Mitchell seems to think that the purpose of the economy is to generate revenues for the government!

Even Mitchell admits it:

2012 Elections Bush Tax Cuts Constitutional CPAC Economy Federal Government Libertarian Paul Ryan Spending Wall Street
This entry was posted on Sunday, August 19th, 2012 at 9:09 am and is filed under Constitution, Economics, Politics. You can follow any responses to this entry through the RSS 2.0 feed. Both comments and pings are currently closed.
Many of the articles on Light from the Right first appeared on either The New American or the McAlvany Intelligence Advisor.