Tossing the Fourth Amendment Under the Cell Phone Tracking Bus

Privacy advocates aren’t going to like this one, but a 2-1 ruling in the U.S. Circuit Court of Appeals for the Sixth Circuit has given law enforcement officials the legal right to track suspects by cell phone in real-time without first obtaining a warrant. 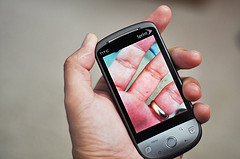 This is how the Fourth Amendment is undermined: ignore what it says, set up a straw man argument, and then argue against that straw man.

The straw man the court used was an analogy of hounds chasing a fox. The fox cannot be protected under the Fourth Amendment just because the Fox didn’t know he was providing the hounds with his scent.

Here is what the court wrote:

This is not a case in which the government secretly placed a tracking device in someone’s car. The drug runners in this case used pay-as-you-go (and thus presumably more difficult to trace) cell phones to communicate during the cross country shipment of drugs.

Unfortunately for the drug runners, the phones were trackable in a way they may not have suspected. The Constitution, however, does not protect their erroneous expectations regarding the undetectability of their modern tools.

Let’s look at what the Fourth Amendment to the Constitution actually says:

Let’s be picky. “No Warrants shall issue, but upon probable cause…”  Where does it say, “except when tracking by cell phones?”  “Supported by Oath or affirmation.” By a judge, having looked at the evidence, and deciding that there is “probable cause.” Where is that in the court’s decision? Oops, missing.

And what about “particularly describing” the place to be searched, and the persons or things to be seized?” Did the officers know in advance that they would find 1,100 pounds of marijuana in his motor home? Or was that just luck?

Here’s the outrage, from the court:

The Constitution, however, does not protect their erroneous expectations regarding the undetectability of their modern tools.

Constitutional Fourth Amendment
This entry was posted on Saturday, August 18th, 2012 at 9:16 am and is filed under Constitution. You can follow any responses to this entry through the RSS 2.0 feed. Both comments and pings are currently closed.
Many of the articles on Light from the Right first appeared on either The New American or the McAlvany Intelligence Advisor.