Steve Chapman: Ryan and the Real Enemy of Medicare

President Barack Obama’s campaign has a new ad accusing Ryan and Mitt Romney of a scheme “ending Medicare as we know it.” But the real enemy of Medicare “as we know it” is not Ryan. It’s arithmetic. 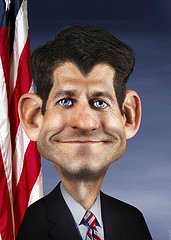 This is an interesting point of view. It’s not very sexy and not eye-catching like the Obama story: ending Medicare as we know it. But it’s true: left alone, Medicare will end itself, all by itself.

Medicare is the second biggest item in the entire federal budget and one of the fastest growing. Over the past 30 years, its cost has doubled as a share of our gross domestic product, and over the next 30, it’s on track to double again.

At the rate we’re going, Medicare, Medicaid, Social Security and interest payments will consume the entire federal budget by 2025.

And Ryan’s approach does two things: it protects those already in the system, and gives those not in the system time to adjust:

Chapman is honest about Ryan:

Not that he has a stellar record in this or other areas of the budget. In the past, he’s been the fiscal equivalent of a chicken hawk: tough until it’s time to put his own survival on the line.

He voted for President George W. Bush’s plan to furnish prescription drug coverage to seniors, adding $8 trillion to the government’s unfunded obligations. He voted to bail out General Motors. He voted for TARP.

He did more than his share to help Bush add $5 trillion to the national debt.

All that aside, I think the real enemy of Medicare is that it violates the Constitution. The fact that it is unsustainable helps point out its fatal flaws. But to me the biggest flaw is getting the government involved where it doesn’t belong. And you can’t fix that through reform.

2012 Elections General Motors Medicare Mitt Romney Obama Paul Ryan Social Security TARP
This entry was posted on Saturday, August 18th, 2012 at 11:25 am and is filed under Economics, Politics. You can follow any responses to this entry through the RSS 2.0 feed. Both comments and pings are currently closed.
Many of the articles on Light from the Right first appeared on either The New American or the McAlvany Intelligence Advisor.