Planning for Military Action Against the Tea Party 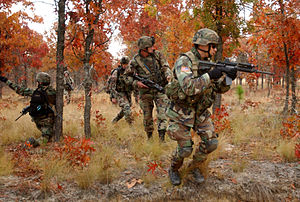 Kevin Benson, a retired U.S. Army colonel with a strong background in military tactics and a degree from the U.S. Military Academy (West Point) and Jennifer Weber, an associate professor of history at the University of Kansas, have just developed a scenario whereby U.S. military forces quashed a “tea party” insurrection in South Carolina in the year 2016.

The article, appearing in Small Wars Journal and subtitled “Scenario 2016,” purported to question the military’s readiness to put down such an insurrection if it were to occur. By creating the “story” of such an insurrection, the authors were able to suggest how military forces would handle certain legal restrictions, limitations, and the media. Their conclusion was that, given the state of technology and the likelihood of such action generating public outcry and additional civilian resistance, the operation to put down the insurrection would be challenging but, in the end, successful.

The warning to those inclined to use force against the federal government was clear:

In this paper, we posit a scenario in which a group of political reactionaries take over a strategically positioned town and have the tacit support of not only local law enforcement but also state government officials, right up to the governor. Under present law, which initially stemmed from bad feelings about Reconstruction, the military’s domestic role is highly circumscribed.

In the situation we lay out below, even though the governor refuses to seek federal help to quell the uprising (the usual channel for military assistance), the Constitution allows the president broad leeway in times of insurrection.

And just who would those “reactionaries” be?

In May 2016 an extremist militia motivated by the goals of the “tea party” movement takes over the government of Darlington, South Carolina, occupying City Hall, disbanding the city council, and placing the mayor under house arrest. Activists remove the chief of police and either disarm local police and county sheriff departments or discourage them from interfering.

In truth, this is hardly necessary. Many law enforcement officials already are sympathetic to the tea party’s agenda, know many of the people involved, and have made clear they will not challenge the takeover. The militia members are organized and have a relatively well thought-out plan of action.

The authors describe those extremists as taking the radical position of believing they have the right to replace a government that no longer derives its “just powers from the consent of the governed” but is actually “destructive to these ends.”

Therefore, they say, the people can alter or abolish the existing government and replace it with another that, in the words of the Declaration, “shall seem most likely to effect their safety and happiness.”

The authors then posit just how such a scenario might play out. The governor calls the president for a little help in quelling the insurrection, and the president is only too happy to comply. Niceties such as the Posse Comitatus Act, which was passed in 1878 expressly to limit the powers of governors and other local law enforcement agencies in using federal military personnel to enforce local laws, have been overridden, according to the authors. Instead, the president invokes powers granted by the Insurrection Act of 1807 (and amended, conveniently, in 2008) to wit:

The president may employ the armed forces, including the National Guard in Federal service, to restore public order…when, as a result of [any] other condition in any State…, the President determines that

[or] so hinders the execution of laws of a State…that any part…of its people are deprived of a right, privilege, immunity or protection named in the Constitution…and the constituted authorities of that State…are unable…to protect that right, privilege or immunity.

The rest of the scenario, according to the authors, plays out according to script: the president appoints his Attorney General and the Department of Justice as the lead federal agency to handle the “crisis.” He calls up the South Carolina National Guard to federal service. The Joint Chiefs draw up an action plan. Northern Command (tasked to provide military support for civil authorities inside the United States) calls up the Fifth U.S. Army for operations, calling it a Joint Task Force, and alerts Army units at nearby Fort Bragg, North Carolina, and Fort Stewart, Georgia, and the marines at Camp Lejuene, North Carolina, for duty.

The authors point out some of the logistical difficulties involved. The mainstream media will be all over the event like flies in a barnyard. Gathering data on the insurgents will be problematic. Any outrageous behavior by those forces will likely generate support for the rebels. Facebook, Twitter and other electronic media will provide information to observers outside the control of the mainstream media. The soldiers will no doubt have loyalties to people they know who are living in Darlington, and so their response to orders to put down the resurrection by firing on them may be questionable. Say the authors: “Countering Al Qaeda web-based propaganda is one thing, countering domestic information bombardments is another…entirely.”

But job one is to put pressure on the rebels and force them to give up their control by persuading them that their efforts are fruitless and continued resistance will be disastrous for them:

The pace of the operation needs to be deliberate and controlled. Combat units will conduct overt Show of Force operations to remind the insurrectionists they are now facing professional military forces, with all the training and equipment that implies. Army and Marine units will remove road blocks and check points both overtly and covertly with minimum essential force to ratchet up pressure continually on insurrectionist leadership…

Federal forces continue to tighten the noose as troops seize and secure power and water stations, radio and TV stations, and hospitals. The final phase of the operation, restoring order and returning properly elected officials to their offices, will be the most sensitive.

The fate of the rebels is certain. Faced with overwhelming force by trained professionals in the art of killing and “securing rebel territory,” it’s just a matter of time. Conclude the authors:

War, and the use of federal military force on U.S. soil, remains an extension of policy by other means.

Given the invocation of the Insurrection Act, the federal government must defeat the insurrection, preferably with minimum force. Insurrectionists and their sympathizers must have no doubt that an uprising against the Constitution will be defeated. Dealing with the leaders of the insurrection can be left to the proper authorities, but drawing from America history, military advice would suggest an amnesty for individual members of the militia and prosecution for leaders of the movement who broke the law.

But such an outcome will be certain only if the curricula in the various war colleges includes a careful assessment and development of plans to neutralize such “threats” to national sovereignty:

The subject of how American armed forces will conduct security and defense operations within the continental U.S. must be addressed in the curricula of our Staff and War Colleges.

Constitutional Department of Justice Extremist Federal Government Mainstream Media Media Bias Military State Government Technology Twitter War
This entry was posted on Friday, August 17th, 2012 at 6:02 am and is filed under Constitution. You can follow any responses to this entry through the RSS 2.0 feed. Both comments and pings are currently closed.
Many of the articles on Light from the Right first appeared on either The New American or the McAlvany Intelligence Advisor.