Paul Ryan Wants to “Save” Medicare

Donald Lambro: Paul Ryan’s Plan to Save Medicare From Insolvency

Would Ryan really destroy Medicare, as Obama and the Democrats say? The answer is an unequivocal no.

Under the Ryan-Wyden plan, “all Medicare beneficiaries would be guaranteed the level of benefits” now offered in traditional Medicare, says a new study of the proposal by Heritage Foundation health care analysts Bob Moffit and Rea Hederman. 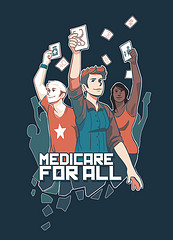 Medicare for All (Photo credit: juhansonin)

In my opinion, the Heritage Foundation is a quasi-conservative, pro-war think tank that occasionally comes up with some good analyses of current issues. I’ve been known to reference some of their work in my writings from time to time. Their analysis, referred to here by Lambro, the chief political correspondent for The Washington Times, illustrates what I mean.

Medicare can be saved. It must be saved. It cannot be allowed to fail. Too many people are dependent upon it. Whatever it takes…etc., etc., etc. Lambro thinks the best way to save it is to insert some free market principles into the failing system, sort of like oxygen to a patient who is already brain-dead. Explains Lambro:

Gone under their plan would be the waste-ridden price control system that vastly overprices medical care costs, pushing Medicare spending through the roof. In its place would be a premium-support system, not unlike the health care plans purchased by retirees now.

The program would provide “higher payment to plans that have a higher number of high-risk and sicker patients.” But it “would also provide lower taxpayer subsidies to high-income beneficiaries by requiring these beneficiaries to pay higher premiums,” says Heritage’s latest analysis.

Finally, the Ryan-Wyden plan “would put Medicare on a budget, just like other government programs.” Its medical costs would no longer be on automatic pilot, pushing costs upward at an unsustainable rate that threatens its viability.

As a black-and-white kind of guy, I decry attempts like these to reform Medicare. It ought to be ended as quickly as possible, or the investment community (when it finally refuses to continue to lend money to the US because of programs like this) will do it for us. But ending it isn’t part of the conversation.

2012 Elections Democrat Free Market Health Care Heritage Foundation Medicare Obama Paul Ryan Spending Subsidies
This entry was posted on Friday, August 17th, 2012 at 12:48 pm and is filed under Economics, Politics. You can follow any responses to this entry through the RSS 2.0 feed. Both comments and pings are currently closed.
Many of the articles on Light from the Right first appeared on either The New American or the McAlvany Intelligence Advisor.