Prior to Mitt Romney’s selection of Paul Ryan as his running mate, I was going to vote “for” Romney in the sense of voting against Obama. In light of this development, however, I not only plan to vote for Romney-Ryan; I also emphatically endorse their ticket, and I urge readers of TOS [The Objective Standard], Objectivists, and fans of Ayn Rand to do the same. 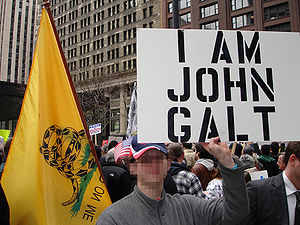 Let’s take a running start at this. Biddle is the editor of The Objective Standard, which, according to its website, is “a quarterly journal written from an Objectivist perspective, Objectivism being Ayn Rand’s philosophy of reason, egoism, and laissez-faire capitalism.” He is a promoter of Ayn Rand’s ideas and philosophy as spelled out in Atlas Shrugged and The Fountainhead. That philosophy, according to Wikipedia’s “shorthand” explanation is:

a philosophy created by Russian-American philosopher and novelist Ayn Rand (1905–1982). Objectivism’s central tenets are that reality exists independent of consciousness, that human beings have direct contact with reality through sense perception, that one can attain objective knowledge from perception through the process of concept formation and inductive logic, that the proper moral purpose of one’s life is the pursuit of one’s own happiness (or rational self-interest), [and] that the only social system consistent with this morality is full respect for individual rights embodied in laissez-faire capitalism.

I have to overlook Rand’s (and Biddle’s) vitriolic hatred of religion in order to accept and support her philosophy of unalienable rights as spelled out in the Declaration.

From there, it’s easy to see why Biddle is not only willing to vote for the Romney-Ryan ticket, but strongly support it as well. Biddle puts it well:

Let’s seize this opportunity to explain to people how and why Ayn Rand’s ideas—her observation-based metaphysics and epistemology, her life-serving morality, and her rights-protecting politics—require phasing out Medicare, Medicaid, and Social Security, so citizens are not enslaved to each other; deregulating the economy, so producers can create wealth, jobs, and prosperity; eliminating barriers to immigration, so Americans can associate and contract with whomever they choose; ending regimes that seek to harm us, so we can live free from terrorism; in short, reestablishing the Land of Liberty, so Americans can exercise their moral right to the pursuit of happiness.

Isn’t this what we in the freedom fight are striving for? In light of so much Ryan-bashing not only from liberals but from neo-conservatives, this is a refreshing, if challenging, point of view.

2012 Elections Ayn Rand Capitalism Economy Freedom Jobs Liberty Mitt Romney Obama Paul Ryan Religion Tea Party
This entry was posted on Friday, August 17th, 2012 at 12:37 pm and is filed under Economics, Politics. You can follow any responses to this entry through the RSS 2.0 feed. Both comments and pings are currently closed.
Many of the articles on Light from the Right first appeared on either The New American or the McAlvany Intelligence Advisor.