“Over 77 years and now through 13 recessions, Social Security has not added one penny to our deficit or our debt,” Rep. Xavier Becerra, D-Calif., said at a recent hearing by the House Ways and Means Social Security subcommittee. Becerra is the top Democrat on the panel. 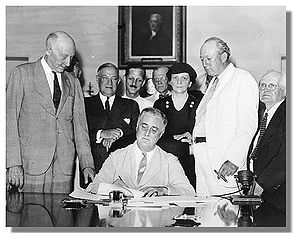 Becerra is a fool. He sports an impeachable 17 (on a scale of 100) Freedom Index rating based on his voting record’s hewing (or not!) to the limitations of the Constitution. So his economic ignorance is only exceeded by his Constitutional treachery!

Social Security is broke. It was broke from the moment it started back under FDR because it was based on the flawed premises of a Ponzi scheme. It’s just taken this long for its unwinding to become obvious. So obvious, in fact, that politicians like Becerra are forced to make stupid statements in order to defend it.

For nearly three decades Social Security produced big surpluses, collecting more in taxes than it paid in benefits. The government, however, spent that money on other programs, reducing the amount it had to borrow from the public, including foreign investors. That’s why some advocates complain that Congress has “raided” Social Security…

Social Security is now spending a portion of the interest because it needs cash to cover monthly benefit payments. This year Social Security is projected to pay $789 billion in benefits and administrative costs and collect $623 billion in payroll taxes and taxes on benefits, a shortfall of $166 billion.

About $112 billion of the shortfall is from a temporary reduction in the payroll tax that is scheduled to expire in January. There is no question that money adds to the budget deficit because Congress financed the tax cut through borrowing. (my emphasis)

Do you see what just happened here? A liberal politician is trying to defend Social Security, and the liberal WaPo is saying he’s wrong, that Social Security “adds to the budget deficit.”

That’s really quite remarkable, when you think about it.

Constitutional Deficit Democrat Elite Establishment FDR Freedom Liberal Ponzi Scheme Social Security Spending Surplus Taxes
This entry was posted on Thursday, August 16th, 2012 at 7:00 pm and is filed under Economics, Politics. You can follow any responses to this entry through the RSS 2.0 feed. Both comments and pings are currently closed.
Many of the articles on Light from the Right first appeared on either The New American or the McAlvany Intelligence Advisor.