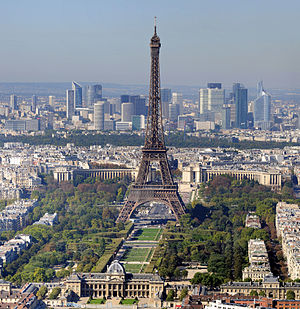 Vincent Grandil, a partner in the Paris law firm Altexis, which caters to rich French citizens, is increasingly being asked by his clients if now would be a good time to flee France for countries with lower tax rates:

We’re getting a lot of calls from high earners who are asking whether they should get out of France. Even young, dynamic people pulling in 200,000 euros [$250,000] are wondering whether to remain in a country where making money is not considered a good thing.

When Francois Hollande was running for president earlier this year he made certain that his countrymen’s disdain for the wealthy was reflected in his platform if he were elected. Among measures to cut back on electricity generated by nuclear power in favor of much more expensive and less reliable renewable energy sources and hiring another 150,000 people onto the public payrolls was his plan to “tax the rich”: Incomes above 1 million euros a year would be taxed at 75 percent instead of the current 41 percent.

As president of France, Hollande is now working hard to get that measure passed by the Socialist controlled houses of parliament in September even though it isn’t expected to raise any significant amount of revenue. Sophie Pedder, the Paris bureau chief for The Economist, was interviewed on National Public Radio the day of Hollande’s election victory, and was asked why he was pushing for this tax increase that would affect such a tiny percentage of French citizens. Pedder responded:

Well, it’s quite interesting because he’s been very clear that he doesn’t expect to raise almost any revenue at all from the tax rate. He says what he wants to do is impose a sort of morality on high earners and on what he calls indecent wages.

So he’s really trying to kind of curb, I suppose, excess, and make sure that big bosses, big bankers, and those who are going to be in this sort of an earning bracket will reward themselves with the sort of salaries that people don’t find outrageous. And that’s what he’s after. It’s not about revenue.

How many people, out of a total population of 65 million would be affected by this tax increase? Pedder answered: Probably no more than about 3,000 French households will be affected by this…. That’s an absolutely tiny fraction…. So once you start looking at numbers like that, you realize how this is very much a symbolic gesture.

And do the French support the idea? Said Pedder:

I think it’s been incredibly popular. And if I look back over this campaign, I think that it really marked the moment when he sort of touched French hearts about what he was really trying to do. There were polls that were taken immediately after his announcement, which suggested that the majority of the French thought it was a good idea. So he’s not going against the sort of popular mood at all, far from it.

French people have an uncomfortable relationship with money. Here, someone who is a self-made man, creating jobs and ending up as a millionaire, is viewed with suspicion. This is big cultural difference between France and the United States.

Some have already left the country for places that don’t punish wealth so severely. In fact, almost anywhere would be a better choice. The United Kingdom’s top tax bracket is 45 percent, Sweden’s is 57 percent, and Belgium’s is 55 percent. A realtor in Brussels thinks Hollande’s proposal is crazy but is enjoying the increase in business as a result. Jean Dekerchove, manager of Immobilier Le Lion, a high-end agency, says that calls since May have picked up considerably:

It is a ridiculous proposal, but it’s great for us. It’s a huge loss for France because people and businesses come to Belgium [which shares its western border with France] and bring their wealth with them.

But we’re thrilled because they create jobs, they buy houses and spend money—and it’s our economy that profits.

Some have already left. Laetitia Casta, a wealthy French model (and a Victoria’s Secret Angel) moved to London while Alain Ducasse, a French chef, became a naturalized citizen of Monaco to take advantage of that principality’s very low tax rates. French singer and actor Johnny Hallyday (nicknamed “the biggest rock star you’ve never heard of”) moved to Gstaad, Switzerland, to escape the high taxes of France.

Hollande’s proposal is dampening enthusiasm for others to move to France as well. When Pedder was asked about that, she said there is “already…evidence that international companies [in France] that are looking to recruit…foreign senior executives into Paris…are beginning to hear…a bit of apprehension.”

That apprehension is justified. According to the latest index from the Heritage Foundation that ranks countries on the basis of their economic freedom, France comes in at a dismal 63.2, making it the 67th freest country in their 2012 Index.

And while France was just beginning to recover from a recession that followed the Great Recession in the United States, the Bank of France is predicting that it will go into recession again this fall.

But Hollande doesn’t seem to care. His Labour Minister, Michel Sapin, announced in early June plans to fine companies that are thinking of laying off workers severely enough “to make layoffs so expensive for companies that it’s not worth it.”

This of course will ensure that any companies planning to lay off some of their employees will do so immediately before any such mandate goes into effect, as well as ensuring that those too valuable to fire can be moved overseas. Such a mandate will also ensure that any company thinking of hiring new people will give such a decision very careful thought: once hired, never fired!

Hollande must be given credit on at least one point: as a Socialist he thinks that capitalism is evil and must be killed. As president he is now implementing all the plans necessary to do so.

Capitalism Economy Energy France Freedom Great Recession Heritage Foundation Jobs Polls Recession Taxes
This entry was posted on Thursday, August 16th, 2012 at 6:41 am and is filed under Economics. You can follow any responses to this entry through the RSS 2.0 feed. Both comments and pings are currently closed.
Many of the articles on Light from the Right first appeared on either The New American or the McAlvany Intelligence Advisor.