Kim Dotcom of Megaupload Fights Back!

As the power elite that wants to run the world continues to race against time more and more brutally, what we call the Internet Reformation becomes ever more visible.

It is becoming more visible because as the elites shove the world toward global governance, people being shoved, some of them, push back.

In the past week, we’ve seen three high-profile instances of this sort of resistance. Kim Dotcom, CEO of destroyed Megaupload, has launched a website to proclaim his innocence and begun releasing surprisingly tuneful pop music to plead his cause and shape his public image. 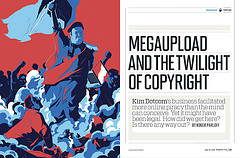 Megaupload and the Twilight of Copyright (Photo credit: mikesolita)

Sometimes Anthony Wile goes on a tear, trying to cover way too much to support his point: the internet is generating pushback. But his reference to Kim Dotcom is useful.

Kim’s arrest by police on January 20th this year made headlines around the world. The excessive use of police power simply went beyond describing. Wikipedia’s brief mention of “armed officers arriv[ing] in helicopters and dropp[ing] into the Dotcom mansion courtyard” just barely suggests the ferocity of the attack on him. And for what? Copyright infringement!

But he is fighting back. Having secured a judgment from a New Zealand High Court judge that the warrants used in this raid were unauthorized—see this from Wikipedia:

On June 28, 2012, New Zealand High Court Justice Helen Winkelmann found the warrants used did not adequately describe the offences to which they were related. “These categories of items were defined in such a way that they would inevitably capture within them both relevant and irrelevant material. The police acted on this authorization. The warrants could not authorize seizure of irrelevant material, and are therefore invalid.” Justice Winkelmann also ruled the FBI’s cloning of the seized hard-drives invalid. This judgment calls the admissibility of the evidence in later extradition hearings into question. (My emphasis)

Dotcom is fighting back. He has launched a website proclaiming his innocence in advance of his trial, hoping to influence public opinion in his favor. And the PTB (Powers That Be) can do little to stop him.

And that’s the point of Wile’s article:

But as we long ago predicted, the Internet Reformation is fairly unstoppable at the moment. The European Union is falling apart, the global warming scam is unraveling, the war on terror has not gone as planned in Afghanistan and many other elite promotions have been exposed in detail on the Internet.

The ancient power elite, that evidently wants to run the world and uses its control of central banks to fund its mania, is in no sense defeated but it is facing challenges that it has not faced since the Gutenberg Press itself began exposing the power structure 600 years ago.

May those challenges, like those of Mr. Dotcom, continue and multiply.

Afghanistan Elite Establishment European Union Global Warming Internet War War on Terror
This entry was posted on Thursday, August 16th, 2012 at 2:34 pm and is filed under Constitution, History. You can follow any responses to this entry through the RSS 2.0 feed. Both comments and pings are currently closed.
Many of the articles on Light from the Right first appeared on either The New American or the McAlvany Intelligence Advisor.