the Fed has created an enormous pool of “money” since the credit crisis. In fact, they have more than tripled their monetary reserves. Doesn’t that mean that we should have a more than tripling of prices? 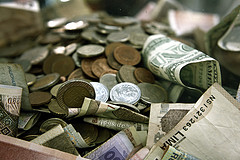 Good question, and one that I’ve asked myself for a long time. Where is the price inflation that inevitably (we are told) follows monetary inflation? There is a little, of course, and some is buried inside the economy: price decreases that we would otherwise enjoy due to more efficient production and creative new technologies aren’t being felt.

But Bowyer makes a number of good points here:

Even allowing for the time delays and the slower circulation of money in a more slowly moving economy, it seems as though monetary shenanigans which started in 2007 should have been felt by the summer of 2012.

And so, why not? He does some good clarifying of what some, including myself, consider difficult mechanics involved in creating money:

Let’s start with the Fed and money. There is a kind of short-hand in which we say the Fed prints money. But that’s not exactly true. Money creation is a joint exercise between the central bank and the banking system. What the fed creates are entries in an accounting system which gives the banks permission to act as if there is extra money on their balance sheets.

And then he simplifies the process even further by using an everyday example: syrup:

I like to think of monetary base as money syrup, like the syrup that’s used to make soda. You add the carbonated water to the syrup and you get soda (or pop, or soda pop, depending on where you live.) The ratio of syrup to soda is the soda multiplier. How fast we buy and drink the soda is the velocity.

This makes sense to me. He also explains that many dollars are overseas, waiting to be spent sometime in the future. So the price inflation down at the store is there waiting to happen. Just not yet.

Banking Central Bank Fiat Currency Inflation Paper Money
This entry was posted on Wednesday, August 15th, 2012 at 9:33 am and is filed under Economics. You can follow any responses to this entry through the RSS 2.0 feed. Both comments and pings are currently closed.
Many of the articles on Light from the Right first appeared on either The New American or the McAlvany Intelligence Advisor.