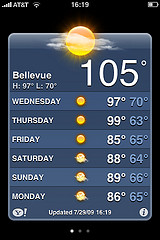 In his testimony August 1 before the Senate Environment and Public Works Committee, climate scientist John Christy revealed the results of his latest work showing “clear evidence…that extreme high temperatures are not increasing in frequency, but actually appear to be decreasing.” Christy does his research at the University of Alabama, monitoring global temperature changes through remote satellite sensing which he developed along with a partner, Roy Spencer. For his efforts, Christy has been awarded NASA’s Medal for Exceptional Scientific Achievement and the American Meteorological Society’s “Special Award.”

In his testimony, Christy presented evidence that current concerns about recent events—heat waves, wild fires, droughts, freak storms, and flooding—do not in fact reflect climate change (global warming) caused by humans, and concerns about human-caused global warming are in fact overblown. What Christy did was analyze the number of state record high and low temperatures, by decade, and concluded that “since 1960, there have been more all-time cold records set than hot records in each decade.”

When critics noted that there are only 50 states with this data—a possibly statistically insignificant number from which to draw such conclusions—Christy then looked at “the year-by-year numbers of daily all-time record high temperatures from a set of 970 weather stations with at least 80 years of record,” and found that additional data not only confirmed his original conclusion, but expanded it: There were several years with more than 6,000 record-setting highs before 1940, but no years with over 5,000 record highs after 1954.

He then went on to explain that since tracking temperature change is a long-term proposition, he created 10-year moving averages of temperatures recorded from 704 stations that had at least 100 years of data. The result? Average high temperatures have dropped significantly since the 1930s, with averages running at about half of those recorded back then.

He then answered the question he knew panelists would be asking: What about 2012? Isn’t the continuing string of unseasonably hot temperatures being experienced across the country evidence of global warming?

Based on his analysis of record high temperatures in seven central U.S. states and the West Coast, the current continuing heat wave “is smaller than previous events” going back to the 1930’s. Christy then went on to answer the same question about the current drought, with the same answer: There is no discernible trend toward excessive drought conditions when compared to data going back to the year 1900.

Christy goes where the data takes him, without apparent ideological overtones or agendas. In 2003, Christy co-authored a study for the American Geophysical Union (AGU)—back when the global warming crowd was coming into full bloom—which concluded that human activities were warming Earth’s climate at a faster rate than ever before.

But in a telephone interview following the publishing of that study, Christy warned about being too dogmatic:

It is scientifically inconceivable that after changing forests into cities, turning millions of acres into farmland, putting massive quantities of soot and dust into the atmosphere and sending quantities of greenhouse gases into the air, that the natural course of climate change hasn’t been increased in the past century…

[But I am] still a strong critic of scientists who make catastrophic predictions of huge increases in global temperatures and tremendous rises in sea levels.

Christy continued his research, and when the AGU issued a follow-up statement in 2007, Christy backed away from it. In an interview with Fortune magazine, Christy said:

As far as the [2003 statement from] the AGU [is concerned], I thought that was a fine statement because it did not put forth a magnitude of the warming. We just said that human effects have a warming influence, and that’s certainly true. There was nothing about disaster or catastrophe. In fact, I was very upset about the latest AGU statement [in 2007]. It was about as alarmist as you can get.

His work, and his commitment to take it where it led him, resulted in his writing an editorial for the Wall Street Journal that separated him from many of his colleagues:

I’m sure the majority (but not all) of my IPCC colleagues cringe when I say this, but I see neither the developing catastrophe nor the smoking gun proving that human activity is to blame for most of the warming we see.

Christy was referring to the UN-established Intergovernmental Panel on Climate Change (IPCC), which is blatant in its support of the Kyoto Protocol. Its primary activity is publishing special reports on topics supportive of the implementation of that treaty. But Christy appears not to care much about what those colleagues think. In 2009, he told the U.S. House Ways and Means Committee:

From my analysis, the actions being considered to “stop global warming” will have an imperceptible impact on whatever the climate will do, while making energy more expensive, and thus have a negative impact on the economy as a whole. We have found that climate models and popular surface temperature data sets [like those of the IPCC] overstate the changes in the real atmosphere and that actual changes are not alarming.

Coming from such a stalwart defender and practitioner of the scientific method which, according to the Oxford English Dictionary, is “a method or procedure that consists in [the] systematic observation, measurement, and experiment, and the formulation, testing, and modification of hypotheses,” whereby such work lets reality speak for itself, Christy is sure to infuriate those whose minds are already made up about “global warming”—oops, “man-made climate change”—and don’t want to become confused by the facts.

Economy Energy Environment Global Warming Senate Treaty
This entry was posted on Wednesday, August 15th, 2012 at 6:31 am and is filed under Politics. You can follow any responses to this entry through the RSS 2.0 feed. Both comments and pings are currently closed.
Many of the articles on Light from the Right first appeared on either The New American or the McAlvany Intelligence Advisor.