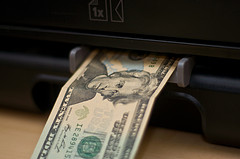 After reviewing the weak jobs report from the Bureau of Labor Statistics (BLS) that was released last Friday, the president of the Federal Reserve Bank of Boston, Eric Rosengren, decided it was time to call for more money to be added to the economy. The jobs report showed a gain that slightly exceeded economists’ consensus, but because of people quitting the work force because they couldn’t find jobs, the unemployment rate went up. And a separate report, not heralded by the media, showed households reported losing more than the BLS’s gains.

What to do? Add more money to the economy. And keep on adding more money until the moribund economy finally awakens. Here’s Rosengren’s prescription:

You [add money] until it’s clear that you’re no longer treading water. You continue to do it until you have documented evidence that you’re getting growth in income and the unemployment rate consistent with your economic goals.

The Fed has already added an astounding $2.3 trillion of new—freshly created out of nothing—money since the start of the Great Recession in 2007, with little to show for it. And so “doctor” Rosengren is calling for more of what made the patient sick in the first place: cheaper money to give false signals to consumers and investors that it’s ok to starting buying and investing again.

What’s surprising is that Rosengren isn’t alone. Reuters just polled 17 “primary dealers”—the large financial institutions that do business with the Fed—and asked them about the chances that the Fed will add new money. Thirteen of them said they expect the Fed to do precisely that no later than the next meeting of the Fed’s Open Market Committee scheduled for September 13th. And the rest of them expect the Fed to add more money in the near future, probably by the end of the year.

All of this is to goose the economy by making money more readily available at lower interest rates, which allegedly works to stimulate consumption, and forces investors into taking higher risks with their money in order to gain better returns than just leaving it at interest.

One could argue the merits of continuing a strategy that hasn’t worked. But these “experts” have overlooked a bit of information that is readily available to all of them: the supply of money in the economy is already increasing. From the end of May to the end of July the Adjusted Monetary Base has exploded by 8.2 percent. That works out to be nearly 50 percent on an annualized basis, and yet those “managing” the economy through monetary policy haven’t, or aren’t, seeing it.

The Adjusted Monetary Base is defined by the St. Louis Federal Reserve Bank as: “the sum of currency (including coin) in circulation…plus deposits held by depository institutions…” In other words, it counts all the money in the economy. And when that number jumps, it’s just a matter of time before each piece of that money starts to reflect its lower value.

It’s happening worldwide. Simon Ward, an analyst at Henderson Global Investors who keeps track of esoteric statistics like these,noted that a key gauge of the world’s supply of money has just jumped as well, growing at 1.6 percent in May and another 2.5 percent in June. So not only is the world’s supply of money growing, it’s growing at an increasing rate.

Ward says that, as a result, the “patient”—the world economy—ought to start recovering. He expects the global decline in industrial production to “bottom out” by October. This was confirmed another “money watcher,” Tim Congdon, of International Monetary Research:

Austrian school economists are doubtful that one can have both at the same time. That school’s position was explained by a writer at the UK Telegraph, James Delingpole:

[Classical] economics is not the fiscal rocket-science you make it sound. Capitalism itself is based on good old-fashioned honesty. The money at the heart of it must be both an honest store-of-value and an efficient medium of exchange.

It ceases to be so when the inherent deceits of fractional reserve banking allow trillions of false credit to be pumped into the system, thus forcing up prices (booms) which inevitably lead to over-valued commodities (busts).

For years the analogy of a drug addict has been used successfully to explain the creation of those booms and busts. When seeking a “high” the addict shoots heroin to obtain the good feeling. When it wears off, he seeks another dose. If he doesn’t get another dose, he goes into withdrawal.

It’s a simplistic analogy, granted, but it’s useful in understanding the role of central banks and fractional reserve banking: they control the supply of heroin. What’s interesting to note is that the Boston Fed president and the Wall Street dealers have missed what’s already happening: the supply of money is exploding, and their remedy—more of the same—could lead the addict—the global economy—to overdose.

The specter of much higher prices in the market place grows through ignorance, apathy, and ideological blindness on the part of those administering the heroin. But it’s the only remedy they know.

Banking Capitalism Central Bank Currency Economy Federal Reserve Fiat Currency Great Recession Inflation Jobs Monetary Policy Paper Money Recession Statistics Unemployment Wall Street
This entry was posted on Tuesday, August 14th, 2012 at 6:19 am and is filed under Economics. You can follow any responses to this entry through the RSS 2.0 feed. Both comments and pings are currently closed.
Many of the articles on Light from the Right first appeared on either The New American or the McAlvany Intelligence Advisor.