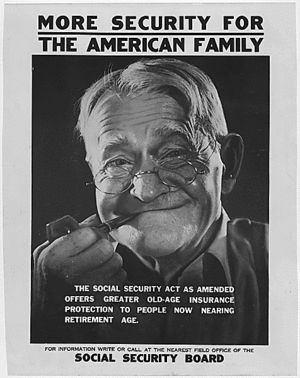 Based on a study by the Urban Institute, AP writer Stephen Ohlemacher has announced a surprise for couples who started collecting their Social Security last year: They won’t be getting all their money back. In fact, under the assumptions by the think tank, they won’t even come close.

Ohlemacher said that a couple who retired after both spouses earned average wages (each earning $43,500 annually) and paid Social Security taxes of nearly $600,000 over their working years, will receive only $556,000 in benefits if they live out their normal life expectancies. That’s a shortfall of $42,000. And if they happen to die sooner, the difference will be larger.

But buried in the Urban Institute’s study is this basic assumption: that the retiring couple could have earned two percent after inflation on those taxes if they had saved the money outside of Social Security. Despite the poor returns on investments over the last decade, real returns on capital over the past 40 years have approached six percent a year, which puts today’s value of their $600,000 paid in taxes at well over $1 million. Put another way: The couple who retired last year is enjoying a much lower standard of living than they would have if they hadn’t been forced to pay into Social Security.

And this is just as it was designed: Social Security is a wealth transfer system that was flawed from the very beginning.

But initial beneficiaries, such as Ida May Fuller, made out handsomely. Ida May was the first beneficiary of Social Security, receiving her first monthly check in the amount of $22.54, on January 1, 1940. Prior to her retirement she worked as a legal secretary during which time her total contributions to Social Security were $24.75. So she nearly broke even the first month.

The fraud built into Social Security was evident from the first. Winthrop Aldrich of Chase National Bank saw through it as merely another tax for the government to spend: “The tax revenue the Treasury got in exchange for [taxes paid into the system] would be a standing temptation to extravagant spending.” During the 1936 presidential campaign, Republican candidate Alfred “Alf” Landon explained the fraud:

It was as if…a father took deductions from his children’s wages to invest for their old age, “invested” them in “his own IOUs,” and spent the money, leaving his kids nothing but those IOUs.

Commentator John T. Flynn noted that in order to redeem those IOUs when benefit payments started exceeding tax revenues, which is happening now, then the taxpayer gets to pay again to redeem them.

Furthermore, Social Security is not an enforceable contract but simply a grant that may be modified or repealed at any time. Said Assistant Attorney General Robert Jackson while arguing for the government before the Supreme Court in Helvering v. Davis,

There is no contract created by which any person becomes entitled as a matter of right to sue the United States or to maintain a claim for any particular sum of money. Not only is there no contract implied but it is expressly [negated], because it is provided in the act, section 1104, that it may be repealed, altered, or amended in any of its provisions at any time.

Nor does the retiring couple have any property rights in their expected payments. Suffolk University Law School Professor Charles Rounds explained:

Despite the term “trust,” the Social Security system contains nothing that remotely resembles the common law trust. There is no segregation of assets, no equitable property rights, no private right of enforcement (all characteristics of the common law trust). It is merely a system of taxation and appropriation sprinkled with trust terms to hide its true nature. [Emphasis added.]

Even statists who are faced with the inevitable winding down of benefits have trouble defending the system. David Cay Johnston,writing for Reuters, explains that the system must be viable because it has a “surplus” of those IOUs totaling $2.7 trillion, which is twice the $1.4 trillion being collected from workers’ wages each year. But that defense of the Social Security perfidy ignores the unfunded liabilities of the millions who expect to receive benefits in the future which, according to Social Security itself, is approaching $9 trillion.

Boston University economist Laurence Kotlikoff said back in October 2010 that the total unfunded liabilities of all federal government promises exceeds $200 trillion, a nearly unfathomably large number, especially when compared to the total annual economic output of the United States of just $14 trillion.

But if the original purpose of Social Security was to replace dependence on self and family with dependence upon government, it has been a resounding success. Some 56 million people receive monthly payments from Social Security, a number that is expected to reach 91 million in the year 2035. According to the Associated Press, about one-quarter of retired married couples rely on Social Security for 90 percent or more of their income. But those on the paying end are increasingly seeing through the haze and the myth and the perfidy of the promise. Mackenzie Millan, 22, just graduated from college and is seeing firsthand that she is paying to support a failing system:

I used to think that it was worth paying for your Social Security, but now I don’t think so.

The growing awareness of young people such as Millan is the key to removing the system from the backs of the taxpayers. With the passage of time the message will become increasingly clear: Social Security is a sham and a fraud.

Federal Government Fraud Inflation Republican Retirement Social Security Supreme Court Taxes
This entry was posted on Sunday, August 12th, 2012 at 10:51 am and is filed under Economics. You can follow any responses to this entry through the RSS 2.0 feed. Both comments and pings are currently closed.
Many of the articles on Light from the Right first appeared on either The New American or the McAlvany Intelligence Advisor.