Just How Important is the Vice President, Anyway?

Ten of the last twenty presidents, dating back to 1900, have been forced from office or come close: one was forced to resign (Nixon), one was impeached (Clinton), two were assassinated (Kennedy and McKinley), one was shot (Reagan), one was shot at twice in three weeks (Ford), two died in office of natural causes (FDR and Harding), one was incapacitated by a stroke (Wilson), and one nearly died of a massive heart attack (Eisenhower). 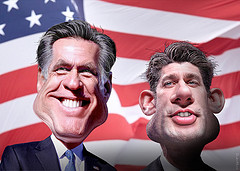 I’ve been staying away from the presidential election for all the obvious reasons: the contenders are part of the same group that’s been leading us into slavery for years: two wings of the same bird of prey, as some wag cleverly stated. Besides, the real action is in the House and the Senate, in my opinion, as well as on the state and local levels.

So I could care less about who Mittens picks for vice president. It won’t matter anyway as the vice president never gets to influence policy.

All of which is a way of saying that Mitt Romney’s choice of a running mate could have very important repercussions whether or not that choice makes much impact on the outcome of the 2012 election.

Romney seems to be a man of unusual health, vigor and personal ethics, and so less likely than most to leave the Oval Office before his term is out if he’s elected, but he’s also 65 years old; things happen.

2012 Elections Eisenhower FDR Mitt Romney Paul Ryan Statistics
This entry was posted on Sunday, August 12th, 2012 at 6:15 am and is filed under History, Politics. You can follow any responses to this entry through the RSS 2.0 feed. Both comments and pings are currently closed.
Many of the articles on Light from the Right first appeared on either The New American or the McAlvany Intelligence Advisor.