What if Unintended CAFE Standards Consequences are Intended?

Legislators and regulators need to observe a fundamental Golden Rule: Do not implement new laws if you have not considered or cannot control important unintended consequences. 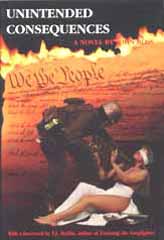 Author Jackson’s premise is wrong: one cannot foresee all the unintended consequences. Many won’t manifest themselves until after the fact.

But that’s not the point I wish to make. Jackson outlines many of the unintended consequences of forcing car makers to raise gas mileage to 54 mpg on their vehicles. And he does a good job:

Jackson concludes, then, that increased gas mileage requirements (CAFE standards) are a “regressive tax” on the poor. But that still isn’t the point I want to make.

What if all these unintended consequences were, after all, intended. What if politicians want to reduce the mobility of lower income people? What if it’s part of a plan to force more people to use public transportation which would require—voila!—more government!

And doesn’t this fit nicely into the global warming scam? We must, after all, reduce our “carbon footprints” in order to meet the latest UN demands—a la the Kyoto Protocol—don’t we? That’s intended, isn’t it?

Global Warming Insurance
This entry was posted on Friday, August 10th, 2012 at 3:53 pm and is filed under Economics, Politics. You can follow any responses to this entry through the RSS 2.0 feed. Both comments and pings are currently closed.
Many of the articles on Light from the Right first appeared on either The New American or the McAlvany Intelligence Advisor.