The First Amendment Protects Chick-fil-A, Too

“We know that it might not be popular with everyone, but thank the Lord we live in a country where we can share our values and operate on biblical principles,” Cathy added in the interview that led to the controversy. 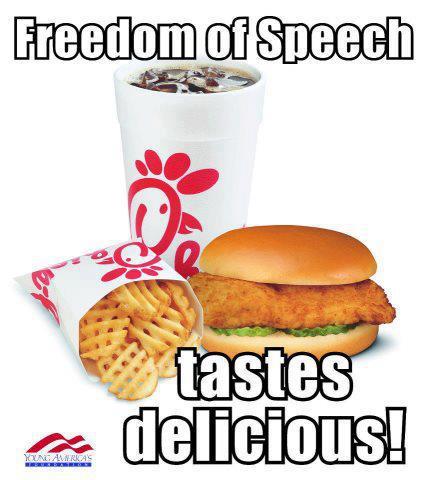 Or at least we used to. Feulner, president of the Heritage Foundation, makes a very good point: the shouting by the “left” over Cathy’s alleged “intolerance” hides their own intolerance of his views.

There are five freedoms guaranteed by the First Amendment (I wonder how many people can recite all of them?):

All that Cathy did was answer, honestly, a question. He said he is “very much supportive of the family, the biblical definition of the family unit.” And the interview was first printed in an obscure Baptist paper.

But the intolerance vigilantes found it—they have a lot of time on their hands, apparently—and blew it up. It gave all the “biggies” on the left to weigh in on the matter: Chicago Mayor (and Obama’s good friend) Rahm Emanuel, Chicago alderman Joe Moreno, Boston Mayor Thomas Menino and Philadelphia city councilman James Kenney, among others. And the media (not our friend, remember) was overjoyed to trumpet their intolerance and outrage.

The Cathy family has been a model of corporate responsibility, helping tackle social problems and strengthen civil society. For years, they’ve taken concrete steps to strengthen families through the programs of its WinShape Foundation. Founded in 1984 by S. Truett Cathy, WinShape supports college scholarships, foster care and international ministries.

It works hard to strengthen marriage, offering counseling and help for couples in crisis, saving marriages that had been on the brink of divorce.

But none of that matters to the media in cahoots with those offended by Cathy’s remarks. Facts don’t matter. And neither does the First Amendment.

Chick-fil-A First Amendment Free Speech Freedom Hate Group Hate Speech Heritage Foundation LGBT Liberty
This entry was posted on Wednesday, August 8th, 2012 at 9:41 am and is filed under Constitution. You can follow any responses to this entry through the RSS 2.0 feed. Both comments and pings are currently closed.
Many of the articles on Light from the Right first appeared on either The New American or the McAlvany Intelligence Advisor.