How Did Chavis Carter Do That?

The Raw Story: Arkansas police claim man shot himself in head despite handcuffs

A Mississippi mother is accusing police in Jonesboro, Arkansas of killing her son after he was found shot in the head with his hands cuffed behind his back in a squad car. 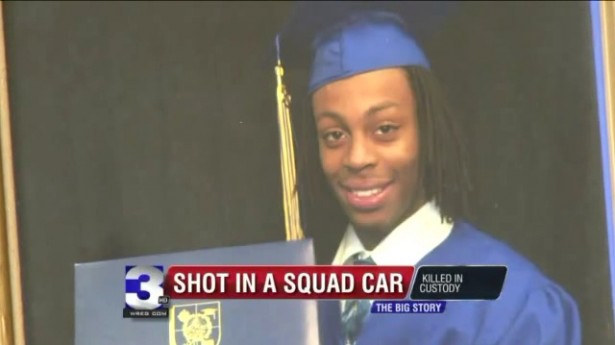 Just how did he manage that? Chavis Carter was a passenger in a pickup truck that was stopped by police and following a search “some marijuana” was found on him. The police arrested him, searched him again, handcuffed him, and put him in the back seat of the cruiser.

The police sergeant said that Carter had been “handcuffed behind his back and double locked, and searched.” On the way to the station the sergeant heard “a loud thump with a metallic sound” and when he stopped the cruiser he found Carter in a “sitting position, slumped forward, with his head in his lap.” There was a small caliber handgun sitting next to him on the seat.

The sergeant concluded that somehow Carter had shot himself in the head, but his mother isn’t buying it: “I think they killed him, my son wasn’t suicidal,” she explained to WREG, adding that police told her he was shot in his right temple, even though her son was left handed.

“I just want to know what really happened,” Teresa Carter said. “That’s all I want to know.”

Carter was searched, twice, and nothing was found. Where did the gun come from? Was it in the back seat from a previous arrest earlier that day? If he had it on his person, how come the officer didn’t find it?

How does an individual who is left-handed shoot himself in the right temple, while handcuffed, behind his back? The article doesn’t say.

Maybe the ACLU will find this case interesting enough to take on.

ACLU Crime
This entry was posted on Tuesday, August 7th, 2012 at 11:04 am and is filed under Constitution. You can follow any responses to this entry through the RSS 2.0 feed. Both comments and pings are currently closed.
Many of the articles on Light from the Right first appeared on either The New American or the McAlvany Intelligence Advisor.