John Stossel: Myths We Live By

“I’m so upset,” said Senate Majority Leader Harry Reid. “Take all the uniforms, put them in a big pile, and burn them. … We have people in the textile industry who are desperate for jobs.” 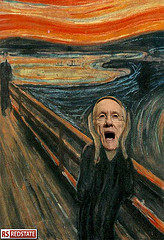 Harry Reid must be a troglodyte—one who lives in a cave and consequently has no understanding of how the world works. But John Stossel comes to the rescue although it’s unlikely Reid will read it:

Here, Reid demonstrates economic cluelessness. It seems logical that Americans lose if American clothing is made overseas. But that’s nonsense. First, it’s no surprise the uniforms were made in China. Most clothing is. That’s fine. It saves money. We invest the savings in other things, like the machines that Chinese factories buy and the trucks that ship the Olympic uniforms.

It’s about the efficiency of markets and the division of labor that Reid fails to understand. In a free market one does what he does best, and trades with others to get what he wants. Art Carden is an economist from Sanford University (not Stanford!) who explains the macroeconomic picture:

So there, Mr. Reid. Read it and weep over your ignorance. If you can just find those candles in your cave…they’re around here somewhere!

China Free Market Harry Reid Jobs John Stossel Senate Technology
This entry was posted on Monday, August 6th, 2012 at 5:05 pm and is filed under Economics, Politics. You can follow any responses to this entry through the RSS 2.0 feed. Both comments and pings are currently closed.
Many of the articles on Light from the Right first appeared on either The New American or the McAlvany Intelligence Advisor.