But the Government has ALWAYS Delivered the Mail!

Postal officials said they also are studying whether they may need to delay other obligations. In the coming months, a $1.5 billion payment is due to the Labor Department for workers compensation, which for now it expects to make, as well as millions in interest payments to the Treasury. 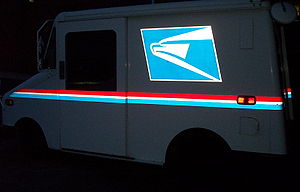 Years ago, when I was less informed on the matter, I laughed (along with Mad magazine where I first saw it stated) that of course the government should deliver the mail! It always has! Any suggestion to the contrary was just silly. And that was the end of it.

Until I started reading. That was the beginning of the end of that misperception. Sometimes ignorance really is bliss!

I understand what the Constitution says about the matter: “The Congress shall have Power to…establish Post Offices and post Roads;” but nowhere can I find anything there that says anything about providing workers with health care and retirement benefits or workers compensation or even interest the USPS must pay on previous monies borrowed to make these payments.

The reality is, and has been for years, that the USPS is broke, insolvent, near bankruptcy. I say, “let it go.” The internet and alternative means of communication have replaced the post office. If documents need to be served or delivered, private companies can do that far better than the outdated, outmoded and outrageously expensive postal service.

Just yesterday I was talking with my mailman, Gene. He’s been working for the post office for 35 years. He has had two knee surgeries, paid for by us because they were damaged while working for the post office. He is collecting disability along with his regular check. He said to me: “I can afford to retire. The wife says we can afford to retire. But the money is too good that I don’t want to retire.”

I didn’t ask him just how good that money is. But you can bet your sweet petunias that it’s much more than a new mailman would be paid to do the same work.

In a microcosm, that’s the problem with the post office. It’s a government agency—I don’t care what they call it—and consequently, predictably, certainly, it is inefficient, backward, and outdated.

It needs to go away and let the free market deliver the mail.

Constitutional Free Market Health Care Internet Post Office Retirement USPS
This entry was posted on Monday, August 6th, 2012 at 11:35 am and is filed under Constitution, Economics, Politics. You can follow any responses to this entry through the RSS 2.0 feed. Both comments and pings are currently closed.
Many of the articles on Light from the Right first appeared on either The New American or the McAlvany Intelligence Advisor.