The Sinking Economy May Sink Obama 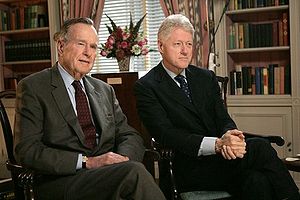 Fooled ya, didn’t I? 20 years have passed and little has changed except the players.

The GDP numbers on Friday showing the economy continuing to slow and headed into the recession predicted months ago by ECRI (Economic Cycle Research Institute), isn’t good news for Obama. The last quarter of last year showed growth (conveniently revised upward in Friday’s report) was 4.1 percent (on an annualized basis), while the second quarter was just 1.5 percent. Not only is the economy slowing, it is slowing at an accelerating pace.

But the White House claimed that Friday’s numbers indicate that “the economy continues to move in the right direction.” Spokesman (read: apologist) for the White House Jay Carney said:

We’re still in a position where we are pulling ourselves out of the very deep hole caused by the Great Recession, and there is still—of course—a great deal of anxiety in the country about the economy.

The establishment’s mouthpiece, The Wall Street Journal, even had to admit that things are looking dour for Obama:

Mr. Obama is running for re-election as a tribune of the middle-class against “millionaires and billionaires,” but his Presidency has been the worst for the middle class and the poor in decades

In return for blowing out the federal balance sheet, Americans got more debt but not more growth. And Mr. Obama says he wants $100 billion in more stimulus now?

Added to the record of the last four years, the 1.5% second quarter should solidify in the public mind that President Obama has failed on the economy.

Talk about mixed emotions. Watching the economy crater under Obama’s watch reminds me of the fellow watching his mother-in-law drive off the cliff in his brand new Cadillac.

Bill Clinton Economy ECRI Elite Establishment Freedom GDP Jobs Obama Recession Spending Wall Street
This entry was posted on Thursday, August 2nd, 2012 at 6:26 am and is filed under Economics, Politics. You can follow any responses to this entry through the RSS 2.0 feed. Both comments and pings are currently closed.
Many of the articles on Light from the Right first appeared on either The New American or the McAlvany Intelligence Advisor.