Star Parker: Can it be un-American to be a Christian?

The fact that there is no evidence that Chick-fil-A discriminates in its business practices did not deter Washington Post columnist Dana Milbank from writing that Dan Cathy’s support of traditional marriage “…implied that gay people (not to mention divorced people) had no business eating at Chick-fil-A.” 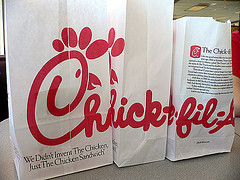 Star Parker’s article is a pretty good summary of the attacks Dan Cathy, founder of Chick-fil-A, has had to endure because he is a follower of Christ. She notes the blatant hypocrisy of Secretary of State Hillary Clinton when she spoke in Alexandria, Egypt:

…to us, real democracy means that every citizen has the right to live, work, and worship as they choose, whether they are man or woman, Muslim or Christian, or from any other background.

Nobody was there to ask her, however, about the attacks and threats directed to Dan Cathy’s company.

Washington Post soiled itself, thanks to the ridiculous comments by one of its writers, Dana Milbank, who said that Dan Cathy’s support of traditional marriage “…implied that gay people (not to mention divorced people) had no business eating at Chick-fil-A.” Where that injudicious comment came from is anybody’s guess. But nothing close to reality, that’s for sure.

The one point Parker didn’t mention is Dan Cathy’s position as founder of Chick-fil-A and reluctant defender of the faith. Did Dan Cathy seek this role? Was he out looking to poke his stick into the eye of the atheists controlling the lamestream media? No. All he did was respond, in the Baptist Press for Heaven’s sake, to a question about his company’s values:

which was enough to set off the PC army into its furious attacks.

But sometimes we are called upon, reluctantly, to take up His cause even though we did not seek it.

Chick-fil-A Hate Group Hate Speech Hillary Clinton Hypocrisy LGBT
This entry was posted on Thursday, August 2nd, 2012 at 2:51 pm and is filed under Constitution. You can follow any responses to this entry through the RSS 2.0 feed. Both comments and pings are currently closed.
Many of the articles on Light from the Right first appeared on either The New American or the McAlvany Intelligence Advisor.