The Atlanta-based, 1,600-restaurant chain, famous for its misspelling-prone cows that urge consumers to “eat mor chikin,” is under a full-scale fascistic assault, complete with obscene celebrity tweets and government bullying. 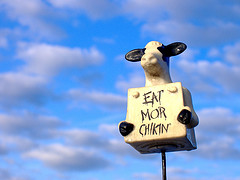 Somehow Dan Cathy (the founder of Chick-fil-A) has successfully gotten under the skin of members of the Christian-bashing left, and he did it without saying a single word about “gay marriage.”

Ever on the alert for anything that smacks of biblical truth and how it might impact society (and turn it away from rampant secularism), liberals are jumping into the chicken fat and exposing their hatred through the expression of vitriol directed towards the company.

In essence, they are shaking their collective (I love that word, and so do they) fists at God. All HE did was give us directions and instructions and rules and laws to follow to obtain abundant life. Jesus says, in the Amplified version, in John 10:10:

The thief comes only in order to steal and kill and destroy. I came that they may have and enjoy life, and have it in abundance (to the full, till it overflows).

Here is what sticks in their craw: Jesus said “I am the way, the truth and the life.” And they don’t want to hear the truth because it would mean having to bow down before it, and HIM, and their excessive sense of self—called hubris—won’t allow them to consider doing that.

So what they do instead is download filth and obscenity and vileness that merely expose their moral bankruptcy for the entire world to see.

Philadelphia Councilman James F. Kenney wrote to Cathy: “take a hike and take your intolerance with you.”

Roseanne Barr tweeted “anyone who eats [expletive thankfully deleted]-Fil-A deserves to get the cancer that is sure to come from eating antibiotic filled tortured chickens 4Christ.”

You get the idea. Got to run. I’m off to visit a nearby Chick-fil-A…

Bankruptcy Chick-fil-A Christian Hate Group Hate Speech LGBT
This entry was posted on Wednesday, August 1st, 2012 at 11:14 am and is filed under Constitution, Religion. You can follow any responses to this entry through the RSS 2.0 feed. Both comments and pings are currently closed.
Many of the articles on Light from the Right first appeared on either The New American or the McAlvany Intelligence Advisor.