America is a Totalitarian Country

Then there’s the so-called war on drugs—a war on people, actually. Lots of politicians admit that they used drugs in their youth—even presidents. Barack Obama wrote in his memoir, “Dreams From My Father“: “Pot had helped…; maybe a little blow (cocaine) when you could afford it.”

And, yet in office, these same politicians preside over an injustice system that jails a million Americans for doing what they did. Don’t they see the hypocrisy? Give me a break. 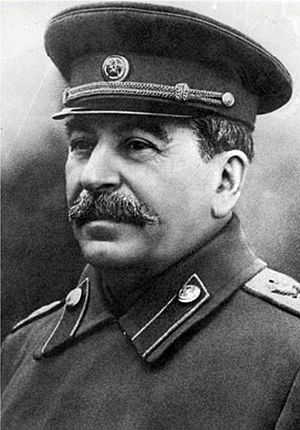 Joseph Stalin after 1943 in military uniform with shoulder marks of the Marshal of the Soviet Union. (Photo credit: Wikipedia)

The president used cocaine? I didn’t know that! He admitted it in his memoirs (allegedly written by his good communist friend Bill Ayers). But the president continues to prosecute the war on drugs—it’s a “war on people” as Stossel correctly points out—indicating a measure of hypocrisy that staggers even me.

Stossel’s point is elsewhere: we are drowning in a sea of regulations. See the book “Three Felonies a Day” by Harvey Silverglate, where, according to one of the book’s reviewers,

He shows how the Department of Justice has led a steady march to expand their reach into the lives of ordinary Americans. The result? [A] panoply of laws giving them the right to prosecute just about anyone for anything at will.

could always find some law the targeted person had broken. That’s easy to do when there are tons of vague laws on the books. Stalin “legally” executed nearly a million people that way.

Stossel’s point is well taken, and I agree: we’re living in a totalitarian country. One measure is the degree of hypocrisy exercised by our leaders by breaking laws themselves that they are enforcing on others.

China Department of Justice Hypocrisy John Stossel Military Obama War
This entry was posted on Wednesday, August 1st, 2012 at 2:47 pm and is filed under Constitution. You can follow any responses to this entry through the RSS 2.0 feed. Both comments and pings are currently closed.
Many of the articles on Light from the Right first appeared on either The New American or the McAlvany Intelligence Advisor.