As tax revenues shrink because of the ailing economy and the habit of issuing more and more debt to cover existing debt obligations expands, states and municipalities will become so debt ridden that they will lose their ability to borrow their way out of a crisis. 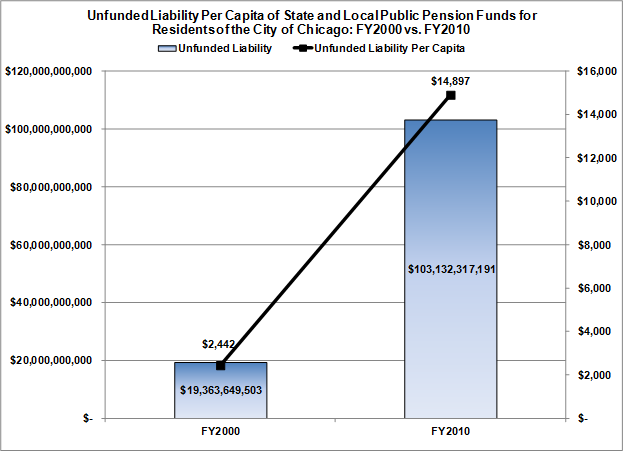 Judy Morris has an interesting graph: one that shows the per-capita pension liability for the unhappy citizens living in Chicago. In 2000 each person had hanging over his head a liability of just $2,442. Today that liability is $14,897—an increase of 600 percent!

And it continues to grow.

In fact, Morris has actually understated, in her brief article, the total unfunded pension liabilities, estimating them to be $4.6 trillion. In fact that liability is over $6 trillion, and probably closer to $10 trillion.

Pension liabilities are based on assumptions about the plan: its present assets, its expected revenues, and its earnings. Present assets are a pretty hard number. Expected revenues are dicey, depending upon the economy’s performance. But its earnings are based upon egregiously generous assumptions about rates of return. Most pension plans estimate that assets will earn between 6 and 8 percent a year.

The only problem with that is that they haven’t been able to get close to earning those rates of returns for years, and it’s increasingly unlikely that they’ll be able to in the future. The Fed has promised to keep interest rates low at least until 2014.

And when you plug in a rate of return of, say, just 3 percent—and even that number is being very generous in my opinion—the unfunded pension liabilities of public pension plans around the country exceed $10 trillion!

And so what does the endgame look like? As Morris says:

This nightmare can only end very badly—bad for taxpayers, bad for bondholders and bad for public sector employees who expect to receive those pension and retirement benefits.

Economy Interest Rates Pension Retirement Unions
This entry was posted on Friday, July 27th, 2012 at 9:36 am and is filed under Economics. You can follow any responses to this entry through the RSS 2.0 feed. Both comments and pings are currently closed.
Many of the articles on Light from the Right first appeared on either The New American or the McAlvany Intelligence Advisor.