CalPERS Made a Paltry 1 Percent in Past Year 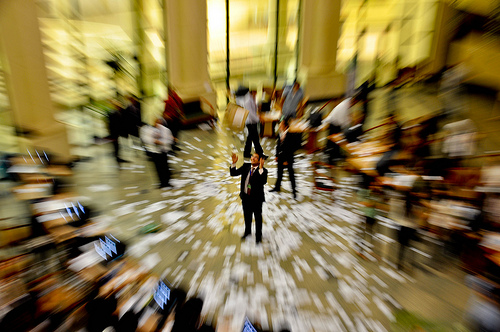 Monday’s report from the California Employees’ Retirement System (CalPERS) contained two numbers that are spelling out the death spiral of that plan: too little money making too little returns. How bad are the returns? According to the report, the plan made a paltry one percent in the past year (July 2011 – June 2012), far below what’s needed for the plan to be able to keep its promises to its beneficiaries

Joe Dear, the plan’s chief investment officer, sang a familiar refrain when he tried to explain the plan’s poor performance:

The last twelve months were a challenging period for all investors as the ongoing European debt crisis and slowing global economic growth increased market volatility and reduced equity returns. It’s a clear reminder that we must remain focused on performance, risk and internal controls in today’s financial environment.

It’s going to take much more than that to bring his plan back from the edge of oblivion. The plan, the largest public pension plan in the country, currently covers 1.6 million Californians but has only $233 billion in assets. At present it is paying out an average of $3,065 every month to each recipient who retired in the last year, but since the plan is at least 50 percent underfunded it won’t take long for those recipients to start seeing substantial cuts in those checks.

The problem is two-fold: The plan is underfunded because the state hasn’t been able to keep up with the plan’s burgeoning costs. The state itself is in dire financial difficulty and there’s no way it could pony up the additional funds to bring the plan even close to being fully funded.

The other problem is the actuarial assumptions underlying the plan itself. The contributions made by the state are determined based on not only continuing contributions from members but also on how much the plan can earn on its assets. If the assumed rate of return is high — say, 8 percent a year — then the state and municipalities funding the plan don’t have to come with so much money. But if the assumption is more realistic — say, 3 percent a year — then the math makes it impossible for the state even to come close to funding the plan properly.

So it’s a Mexican standoff where there are three parties involved: the actuaries making unrealistic assumptions, the beneficiaries who are counting on their three grand a month, and the taxpayers who will have to pony up the difference. Whoever shoots first, loses.

Henry Jones, chairman of the CalPERS Investment Committee, isn’t going to shoot first. Instead, he’s trying to buy some time:

It’s important to remember that CalPERS is a long-term investor and one year of performance should not be interpreted as a signal about our ability to achieve our investment goals over the long term.

And he’s right, but only if one looks back over a sufficiently long term. In his report, the return to the plan over the last 20 years is 7.73 percent a year. But over the past 10 years the plan earned 6.14 percent, a full one percent below the plan’s “benchmark” — the adopted standard of performance for the plan. Over the last 5 years the plan has earned — ready? — 0.10 percent. And that includes a three-year span where the plan made more than 10 percent.

Put another way, the results over the past few years have been nothing short of catastrophic: not enough money in the plan, and the money that is in the plan not making a enough money, to enable the plan to pay out the promised benefits.

But let’s take a closer look. In order for the DJIA to have just kept up with inflation over the last 10 years, it would have to be trading at 12,782. Put another way, after 10 years and six months of taking huge market risks, the DJIA has managed to increase just enough to maintain its purchasing power, nothing more.

If the DJIA had covered inflation and earned just 5 percent a year, it would be trading at 21,041. In other words, CalPERS and others who expected the stock market to return 5 percent a year in addition to inflation are 40 percent short of their goal.

California is not alone in facing the fatal alternatives: angry taxpayers versus angry pensioners. The Center for Retirement Research (CRR) just assessed some 126 pension plans and found the majority of them in the same boat: underfunded by at least 25 percent and probably closer to 50 percent. Those plans have assets of $2.6 trillion, but they should have in excess of $6 trillion to meet their promises to their beneficiaries.

And CRR doesn’t look at the total picture. Some 20 percent of American workers — about 44 million people — are covered by defined benefit plans — that is, plans that are based upon final salary levels and years of service rather than upon what’s in the plan. When there is a shortfall, something has to give: taxpayers pay more or pensioners receive less, or both.

Each is facing the same issues as California: the inevitable aging of the Baby Boomers (10,000 of them are retiring every day), the downsizing that continues to take place in an economy stalled and slipping into recession, the student debt crisis that is crippling new workers with lifelong indebtedness, a housing market that is still seeking a bottom, and European countries that are deep into recession and are cutting back on purchasing American goods and services.

If pensioners in California and elsewhere are still unaware of the precarious position of their plans, they soon will be when the notice comes in the mail that their check for (say) $3,000 a month has been cut to $2,000 or perhaps even to $1,000.

Economy Housing Market Inflation Pension Recession Retirement Stock Market Unions
This entry was posted on Friday, July 27th, 2012 at 6:22 am and is filed under Economics. You can follow any responses to this entry through the RSS 2.0 feed. Both comments and pings are currently closed.
Many of the articles on Light from the Right first appeared on either The New American or the McAlvany Intelligence Advisor.