More and more, this shooting is looking like a deliberate plot staged by the government itself much like Operation Fast and Furious pulled off by the ATF which helped smuggle tens of thousands of guns into Mexico for the purpose of causing “gun violence” in the USA, then blaming the Second Amendment for it. 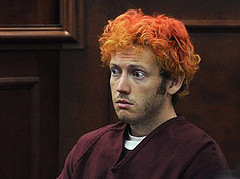 One of my first thoughts, expressed in my initial posting here on Friday morning, was the possibility of a link between the Aurora shooting and the UN treaty in New York. I wrote it, but I was skeptical, thinking it was a bit of a reach.

I don’t think so now, after reading Mike Adams’ article which explores in detail the possibility of the shooting being a false flag event.

His behavior doesn’t add up

His behavior already reveals stark inconsistencies that question the mainstream explanation of events. For example, he opened fire on innocent people but then calmly surrendered to police without resistance. This is not consistent with the idea of “killing everyone.”

Furthermore, he then admitted to police that his apartment was booby-trapped with explosives. If you were really an evil-minded Joker trying to kill people (including cops), why would you warn them about the booby trap in advance? It doesn’t add up.

“Holmes was taken into custody shortly after the shooting, police said, adding he didn’t resist when he was arrested,” reports a local CBS news affiliate.

“After his arrest, Holmes told police about ‘possible explosives in his residence,’ Oates said. When police searched his apartment, they discovered it was booby-trapped and evacuated surrounding buildings, police said. Oates said bomb technicians are determining how to disarm flammable or explosive material in the third-floor apartment. He said police could be there some time.”

None of this checks out. If you’re a killer bent on causing mayhem, why tell the police about your surprise bomb waiting for them back at your apartment?

Adams thinks it’s the FBI. I think the CIA is the more likely culprit:

This is not your run-of-the-mill crime of passion. It was a carefully planned, heavily funded and technically advanced attack. Who might be behind all this? The FBI, of course, which has a long history of setting up and staging similar attacks, then stopping them right before they happen. See four documented stories on these facts:

The one party not mentioned by Adams is the BATFE, which is run by an avid anti-gunner appointed by Obama. But that doesn’t matter. The real emphasis is on generating sufficient anti-gun fervor to force the UN Arms Control Act into and get it passed by the Senate.

Even Forbes.com wrote about this quite extensively, warning readers about the coming gun confiscation effort related to the UN treaty. The story was authored by Larry Bell and says the UN treaty could “override our national sovereignty, and in the process, provide license for the federal government to assert preemptive powers over state regulatory powers guaranteed by the Tenth Amendment in addition to our Second Amendment rights.”

In other words, this has all the signs of Fast & Furious, Episode II. I wouldn’t be surprised to discover someone in Washington was behind it all. After all, there’s no quicker way to disarm a nation and take total control over the population than to stage violence, blame it on firearms, then call for leaders to “do something!” Such calls inevitably end up resulting in gun confiscation, and it’s never too long after that before government genocide really kicks in like we saw with Hitler, Stalin, Pol Pot, Mao and other tyrants.

Here’s the big difference. More than 100 million Americans already own guns. Those poor souls under Stalin, et al, were unarmed.

Stay tuned to see if this false flag conjecture gets legs.

BATFE CIA Colorado Conspiracy Crime Fast and Furious FBI Federal Government Gun Control James Holmes Obama Second Amendment Senate Tenth Amendment Terrorism Treaty United Nations War
This entry was posted on Wednesday, July 25th, 2012 at 6:58 am and is filed under Constitution, Foreign Policy. You can follow any responses to this entry through the RSS 2.0 feed. Both comments and pings are currently closed.
Many of the articles on Light from the Right first appeared on either The New American or the McAlvany Intelligence Advisor.