Minneapolis police Sgt. David Clifford, a SWAT team leader once lauded by the United Nations for the “highest level of dedication and professionalism,” was charged with first-degree assault Tuesday in an off-duty incident last month that left a Ramsey man temporarily on life support. 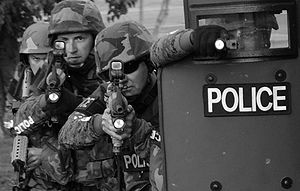 Let’s be clear about one thing. I don’t really care that Clifford sports commendations from the United Nations or the State Department or has a wall full of plaques for valor and service above and beyond. The guy is a thug.

He has a history of blowing up. The city of Minneapolis has already paid out over $1 million to settle police brutality claims because of this thug.

His downfall was striking a man in the face in an unprovoked incident while it was being video-taped. After the attack the thug ran from the scene. He might have gotten away with it except for the video tape. When the newspaper got a hold of the video, it was game over for this thug. He’s going to jail and the city is going to pay another fine. This time it could be in the millions—that’s plural.

That’s going to be small comfort for the victim who has had three brain surgeries as a result of the attack.

But there’s a warning here. When I first read about this my blood started to boil. I began to think about a thug like this, wearing a badge, attacking me or my family. I know what I would do.

The danger is thinking that all cops are thugs. That just isn’t so, but it plays into the hands of those who are trying to discredit local police. 99 percent of them are good guys, well-trained, respectful. And they should be concerned about rogue cops like Clifford because it puts their own lives in danger.

If more and more citizens buy into the idea that no cop can be trusted, then cops will be on the defensive. They will view their positions as adversarial rather than assistive. That will divide the citizens from the cops—into two warring camps. And that can’t be good.

Don’t paint this thug Clifford with too broad a brush.

United Nations Video
This entry was posted on Monday, July 23rd, 2012 at 8:57 am and is filed under Constitution. You can follow any responses to this entry through the RSS 2.0 feed. Both comments and pings are currently closed.
Many of the articles on Light from the Right first appeared on either The New American or the McAlvany Intelligence Advisor.