Mark Steyn: Your Land is My Land

Elsewhere on National Review Online [NRO] this fine morning, Lee Habeeb has a terrific column on Woody Guthrie and “This Land Is Your Land,” a song I have always loathed, mostly on musical grounds—the consciously childlike melody, and the stiltedness of its central rhyme (“this land is my land … New York island”). I especially dislike it at my town’s Memorial Day ceremony when it intrudes on the Fifth Graders’ otherwise splendid repertoire of “God Bless America” and “You’re a Grand Old Flag.”

But Lee reminds us there are other reasons to loathe it. From Inauguration Day 2009:

Hope and change were in the air that cold winter day, and Seeger and Springsteen figured it was time for America to hear the rarely performed stanza.

There was a big high wall there that tried to stop me,
A great big sign there said, “private property”;
But on the back side, it didn’t say nothin’;
That side was made for you and me.

No wonder we’ve never heard that stanza. It changes Guthrie’s song from a celebration of America into a bitter indictment of a nation built on unjust private-property rights. 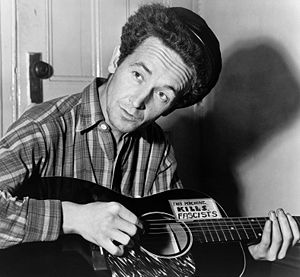 Mark Steyn “loathes” this song but spends precious little time on the hard-core communist who wrote it. On the other hand, Joe Klein did, and here is a little piece of his biography on Guthrie that should suffice for any skeptics or doubters about Guthrie:

Shortly after leaving KFVD, The Light sent Woody back out on the road to investigate the conditions of the migrant Okies. According to Klein, the migrant culture Woody found this time was different: bitter, hardened, angrier, and more open to the action proposed by the union men who were seeking them out. Woody was angered, himself, by what he saw and…“having spent most of the 1930’s on the sidelines, Woody finally was spoiling for a fight. And, as he looked around, the people who seemed to be fighting hardest for the things he believed in were members of the Communist Party.”

I too loathe his song “This Land…” but for different, and perhaps more important, reasons than Steyn’s.

Communism Private Property
This entry was posted on Sunday, July 22nd, 2012 at 3:16 pm and is filed under Constitution, Politics. You can follow any responses to this entry through the RSS 2.0 feed. Both comments and pings are currently closed.
Many of the articles on Light from the Right first appeared on either The New American or the McAlvany Intelligence Advisor.