Police Lie – What a Surprise!

TheNewspaper.com reports that D.C. Metropolitan Police Officer Jeremy Bank stopped Virginia resident Frederick Simms on May 29, 2011 for supposedly making an illegal right turn on Martin Luther King Boulevard. In keeping with the standard script, Banks lied by claiming that he smelled the aroma of marijuana. A search of the car revealed a handgun. Simms was arrested and his car impounded. 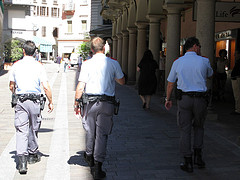 In an outrageous miscarriage of justice, Will Grigg, writing for the Republicmagazine, claims that Officer Banks lied. One of his readers took Grigg to task for such a statement: “So you were there? You must have been, since you state that the officer lied about smelling marijuana and therefore perjured himself…[that’s] shoddy journalism!”

He’s a police officer; he was trained to lie, and expected to do so:

“Police lie. It’s part of their job. They lie to suspects and others in hopes of obtaining evidence. These investigative lies cover a wide web of deception—a web that can get tangled.”

This was the opening sentence of the first article in a two-part series for Officer.com entitled “Training Cops To Lie,” by former prosecutor and police consultant Val Van Brocklin: http://www.officer.com/article/10233095/training-cops-to-lie-pt-1

Truth is a perfect defense against a charge of libel. Officer Bank claimed something for which no evidence existed in order to invent a pretext to seize the car. He belongs to a social caste that is trained to lie, expected to lie, and granted both legal and social permission to do so. He is a professional liar and, when occasion presents itself, a thief. He is also a coward. I happily invite him to sue me, either individually or in my professional capacity, for expressing those manifestly sensible opinions.

I’m of two minds on this. There are rogue police just as there are rogues in any profession. They should be exposed and punished. But they should never be considered the “norm.” It’s unsettling that Grigg suggests that Banks lied as part of departmental policy. That changes the entire conversation. If we can’t trust the police, who can we trust? And doesn’t this set us up for a national police force, since the “locals can’t be trusted”? Another definition of national police force is Gestapo—look it up—and we all know how respectful they were of peoples’ rights.

This entry was posted on Thursday, July 19th, 2012 at 3:11 pm and is filed under Constitution. You can follow any responses to this entry through the RSS 2.0 feed. Both comments and pings are currently closed.
Many of the articles on Light from the Right first appeared on either The New American or the McAlvany Intelligence Advisor.