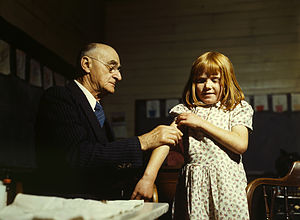 When Dr. Richard Pan’s bill, AB 2019, was debated in a public hearing before California’s Senate Committee on Health, Dawn Richardson, Director of Advocacy for the National Vaccination Information Center (NVIC), showed up to explain why she and her organization opposed the bill. If the bill is enacted into law, Richardson says, it will in effect forced mandatory vaccinations onto children even when their parents have decided it’s in their best interest to deny them. Under current law, parents may file a “personal belief exemption” which allows their children to attend public school without vaccinations. But under Pan’s bill, a doctor must sign off on the parents’ decision first, and most of them won’t.

The idea is that the government has a vested interest in making sure that the parents are making the right decision, have full and complete information before making that decision, and consequently mandates that parents have that “medical conversation” before filing the exemption. The only problem is that it’s difficult to find a doctor that is willing to have that conversation and then sign off on the parents’ request. A young couple who remained anonymous in their report to NVIC had an incident not uncommon in the medical profession:

Our new daughter was born on December 13th, so we had briefly met Dr. Leong at the hospital for our daughter’s initial checkup…There seemed to be no problem at the time with Dr. Leong, but we did not have any discussion about immunizations at that time.

Upon arriving at the Sutter Pediatrics office on Dec. 19th, 2011 for her first doctor’s appointment my husband and I received shocking news. Once Dr. Leong came into the room and my husband informed her that we would be choosing to not immunize our daughter her demeanor completely changed. She instantly became rude and condescending. Her first words were “Well, that is going to be a problem.” She spoke to us as if we were stupid, telling us we seemed like “nice kids”, but that she would not treat our daughter unless we immunized [our daughter with] a long list of immunizations that she wanted us to.

There were only a couple that she was okay with us not getting. She said “since you’re here I will look at her today, but unless you choose to immunize [her] then you’re going to have to find another doctor.”

She repeated herself over and over again that she would not see her unless we immunized. Then she went on to say that no one in that office would see us either…She lectured us and lectured us as we sat there in shock and dismay at what was happening.

We left that appointment feeling sick to our stomachs at what we just endured. [The doctor expressed] complete and utter disrespect of our rights as American citizens and parents making an informed decision that we feel is best for our daughter.

Included in their report to NVIC the couple expressed their revised views of the medical profession’s credibility:

Our view of the public health system is skeptical and leery. It is our right to make informed decisions that are best for our daughter. This is our choice and no one else should be making it for us.

It is very difficult to find a doctor that respects your decision to not immunize. We in no way shape or form should be ostracized for being involved in what is put into our children.

At the hearing Dr. Pan—a pediatrician—responded that such cases were rare, and that his bill was just to ensure that parents had all the information they needed to make an intelligent decision about vaccinating their children.

This is not true.

First of all, a parent intending to file a personal belief exemption…has already decided to exempt their child….

This bill is based on the flawed and incorrect assumption that, if a parent has chosen to exempt their child from one or more vaccines, [then] they have made the wrong decision and need to be further “educated.”

NVIC’s opposition to the bill is in three parts:

And that’s the rub: the intersection of the proper role of government and the parents’ rights to exercise their informed discretion regarding their children. According to Washington: “NVIC does not advocate for or against the use of vaccines. We support the availability of all preventive health care options, including vaccines, and the rights to consumers to make educated, voluntary health choices.”

After hearing from both sides, the committee voted to pass Pan’s measure, 7-1.

Health Care Senate
This entry was posted on Wednesday, July 18th, 2012 at 6:26 am and is filed under Constitution. You can follow any responses to this entry through the RSS 2.0 feed. Both comments and pings are currently closed.
Many of the articles on Light from the Right first appeared on either The New American or the McAlvany Intelligence Advisor.