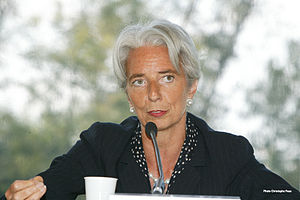 Unfortunately, one month does not make a trend. When June’s numbers are compared to January’s, ADP’s total nonfarm private jobs growth has increased from 110 million to 110.9 million, a gain of 77-100ths of one percent, or about 142,000 new jobs each month. A closer look reveals that most of those jobs were in the highly volatile service sector, in small businesses, usually fast-food or similar businesses, known for their high turnover. In fact, the goods-producing sector gained just one half of one percent employment since January, translating into less than 16,000 job gains each month. These numbers are hardly a “hopeful sign,” but more reflective of an economy that has flat-lined.

Another report from the Department of Labor showed that new claims for unemployment insurance dropped by 14,000 last week to 374,000, the lowest level in six weeks. But that was offset by an upward revision from two weeks ago, and the moving average—a more reliable indicator of what’s really happening—remains near its highest level for the year, at 385,750. And the really bad news appeared at the end of the report: Nearly six million people are still receiving some form of unemployment benefits, either from states or from the federal government.

[Declining] jobless claims are a move in the right direction. The drop, combined with the ADP report…suggests the jobs market is not as weak as recent data have suggested.

John Canally, an economist at LPL Financial in Boston, was more realistic, pointing out that the Federal Reserve needs to see much more improvement or else it will be forced to increase the supply of money in order to stimulate the economy:

The Federal Reserve needs to see sustained improvement, like the [jobless] claims moving back down toward 300,000 and a steady decline in the unemployment rate.

If we get a couple more bad jobs reports, [the Fed] will come in with more stimulus…

That’s exactly the remedy that put the economy into the dumper in the first place: False stimulus resulting in easy money blew up the housing bubble which popped in 2007-2008, resulting in the present Great Recession. More of the same bad medicine isn’t going to speed up the patient’s recovery.

But that didn’t keep Christine Lagarde, head of the world’s central bank, the International Monetary Fund, from making such a suggestion. At a news conference on Monday Lagarde said:

Continued policy action [read: stimulus] is needed to boost the recovery. We believe the U.S. authorities do not have a lot of space available to act, but they should use it to support recovery in the near term.

And, noting that excessive debt creation by the Fed and deficit spending by the federal government continues to push the national debt to levels that will hit the debt ceiling very soon, Lagarde said just to ignore that limit and keep on spending:

It would be far better…that it is addressed early on and before we get close to the risk. We think that the debt ceiling risk is likely to materialize very early in 2013, and I’m sure the Treasury Department can use certain tools and mechanism[s] to [extend] the deficit cliff a little bit into 2013.

If there was an agreement early on, it would be a serious confidence booster for the U.S. economy.

At present, the Fed isn’t listening. One of the most under-reported statistics in all the conversation about the economy is something called its Adjusted Monetary Base (AMB). The AMB is a measure of all the money circulating in the U.S. economy: currency, coins, and reserves held in banks. In February the AMB touched an all-time high of $2.75 trillion. The latest report shows a sharp decline to $2.6 trillion at the end of June, or an 8.2 percent shrinkage in the money supply. Put in street terms, the Fed is decreasing the money supply deliberately and significantly, with the natural result, usually felt several months out, of a decline in economic activity.

That may explain why the Economics Group at Wells Fargo is so pessimistic:

When this data is taken into perspective with the regional manufacturing indices and the ISM (Institute of Supply Management) survey, there emerges a clear picture of a weakening manufacturing sector.

We reiterate our view for subpar economic growth around 1.5 percent for the second quarter.

The group said nothing about the third or fourth quarter when the slowing economy is highly likely to go negative. Tomorrow’s jobs numbers from the Department of Labor notwithstanding (Keynesian economists are predicting job growth of 90,000 for June), the combination of sharp declines in manufacturing, flat-lined job growth, and the Fed’s determination to reduce the money supply, all point to an inevitable recession.

Central Bank Currency Debt Ceiling Deficit Economy Federal Government Federal Reserve Fiat Currency Great Recession IMF Insurance Jobs Keynesian Money Supply National Debt Paper Money Recession Small Business Spending Statistics Unemployment
This entry was posted on Tuesday, July 10th, 2012 at 6:40 am and is filed under Economics. You can follow any responses to this entry through the RSS 2.0 feed. Both comments and pings are currently closed.
Many of the articles on Light from the Right first appeared on either The New American or the McAlvany Intelligence Advisor.