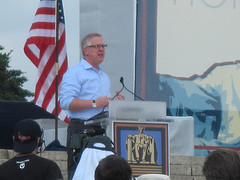 With the help of 14 writers and seven contributors and researchers, Glenn Beck has burst forth with another book that expresses his unique style: fulminating, ranting, exploding, rollicking, sardonic, eclectic, and intemperate. Beck and friends have written 11 best sellers and seven of them have reached the #1 position on the New York Times best seller list. Cowards will no doubt be number eight.

There is much valuable information contained here, some of which is surprising even to those who consider themselves well-read. For instance, who is Madison Grant? You’ll find out starting on page eight. There is no index to his book, so you’ll have to find out the hard way, by reading it. Grant wrote The Passing of the Great Race in 1916, which exposed the Progressive movement’s fascination with eugenics, or ethnic cleansing. What’s more important is learning how many of the Progressive Era’s leading lights favored Grant’s position that “the laws of nature require the obliteration of the unfit” and “human life is valuable only when it is of use to the community or race.”

The reader will be exasperated at Beck’s setting up of a straw man in his caricature of Ron Paul’s foreign policy position, and then destroying it, not with reason and logic, but with absolutist conclusions. In that caricature he accuses Paul of supporting a worldview that gives unfair advantage to the enemies of America:

Even Ron Paul must understand that sometimes…it simply doesn’t work. Ask Hitler. Ask bin Laden. Ask Saddam. We’ve been working diplomatically with the U.N. and others to promote change in Iran and North Korea for how long now?

If we, as a nation, don’t defend the welfare and lives of our citizens, there will be no freedom to protect.

There are so many false assumptions and misstatements of historical fact here that it causes one to scream: “Working with the UN?” “Defend the United States?” Yikes.

And then there’s the nearly unforgivable rant. He targets Jeffrey Sachs, an awesome intellect on the left (who has three New York Times best sellers) for saying something stupid about libertarianism (see page 37). Rather than confront him head-on in his book, Beck prefers to dismiss him out of hand with a sidebar that reads:

Jeffrey Sachs is an elite of the highest order, a guy who sits in the cozy confines of his Columbia University office (where he attempts to “solve” man-made global warming) without having any clue how the real world works.

He’s spent so much time collecting degrees and being part of a university faculty that the idea that people might actually want to work for a living probably makes him queasy. He’s probably written a bunch of scholarly books with high-minded titles implying how smart he is (like “The End of Poverty”) and I bet he’s so “accomplished” that he has three versions of his biography listed on his website: short, medium, and long, so that you can select which version you want by how much time you have to read about how perfect he is.

This is silly and unforgivable in a book that is supposed to give his reader solid, thorough, and persuasive information about how the world really works. Why didn’t at least one of his 21 writers and contributors erase that before it ever got into print?

Aside from the missing index there is no attempt either to provide a solution to the impending installation of the totalitarian state in America. He provides useful background on people such as George Soros and Jim Wallis and themes such as Islam, immigration, and public education. But one will be most surprised at his insertion of discussion in the last chapter about how technology, and the resultant “singularity” (the intersection of genetics, nanotechnology, and robotics which will allow humans, if they so desire, to live forever) will ultimately save us. And so his conclusion reflects the odd eclectic collection of themes in his book:

We must know in our hearts that these changes will come, and that if we welcome them into our world, we’ll become more successful, more free, and more full of light than we could have ever possibly imagined.

Cowards is recommended only for mature readers seeking information that will be helpful to them in the freedom fight and only with the now-unnecessary warning to beware of rants, flights of fancy, and no index.

Elite Establishment Foreign Policy Freedom George Soros Glenn Beck Libertarian Ron Paul
This entry was posted on Tuesday, June 26th, 2012 at 9:27 am and is filed under Reviews. You can follow any responses to this entry through the RSS 2.0 feed. Both comments and pings are currently closed.
Many of the articles on Light from the Right first appeared on either The New American or the McAlvany Intelligence Advisor.