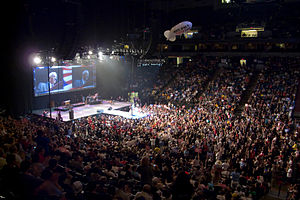 In his latest statement to his supporters, Republican presidential candidate Ron Paul answered a number of questions but left open many more. After announcing in May that he would no longer participate in any other presidential primaries but would concentrate instead on states where primaries had already been held in the hopes of generating additional support, his supporters now know two things: First, he has no chance of winning the Republican nomination in Tampa, Florida, over the weekend of August 27, with just 200 bound delegates. Second, he expects there will be more than 500 delegates there supporting his position, which is far more than anyone anticipated.

We stand to send nearly 200 bound delegates to the Republican National Convention in Tampa. This number shatters the predictions of the pundits and talking heads and shows the seriousness of our movement.

What’s more, we will send several hundred additional supporters to Tampa who, while bound to Romney, believe in our ideas of liberty, constitutional government, and a common-sense foreign policy.

When it is all said and done, we will likely have as many as 500 supporters as delegates on the Convention floor…and while this is not enough to win the nomination, it puts us in a tremendous position to grow our movement and shape the future of the GOP!

This clarifies the purpose of his efforts during the presidential campaign. He likely never expected to win the nomination. What he hoped would happen is exactly what did happen: Using the primaries as a national springboard for expressing and expounding on his principles, Paul has caused the freedom movement he started in 2008 to gain significant traction and momentum. Paul added:

We have never had this kind of opportunity. There will be hundreds of your fellow supporters in Tampa who will be ready and willing to push the Republican Party back to its limited government…roots.

And once the convention is over, the real work begins. First, the momentum generated by his run for the presidency must be focused on candidates in other races where his principles are being promoted. He suggested three: House incumbent from Michigan’s Third District Justin Amash running for his second term, Republican challenger for the Senate from Minnesota Kurt Bills, and Republican nominee Thomas Massie who is seeking election to the House from Kentucky’s Fourth Congressional District.

During his first term, Amash was one of the precious few Republicans who voted against the 2012 National Defense Authorization Act (NDAA), calling it “one of the most anti-liberty pieces of legislation of our lifetime.” He takes the Constitution literally when it comes to war: that only Congress has the power to declare it. He supports the Second Amendment and believes that public schools should be managed locally. In addition, he thinks the federal government should not expand its powers by using the Constitution’s General Welfare, Commerce, or Necessary and Proper clauses. All of which fits perfectly with Paul’s careful, determined, and consistent reliance upon the Constitution.

Bills is currently a member of the Minnesota House of Representatives where he supported reducing the pay of legislators if the state budget wasn’t balanced by the end of the legislative session, and allowing gold and silver to be used as legal tender in the state.

Massie was a supporter of Paul’s son, Rand Paul, in his run for the Senate in 2010 and has, in turn, been endorsed by Paul, FreedomWorks, the Club for Growth, Gun Owners of America and Young Americans for Freedom.

The U.S. Constitution is at the heart of what the Campaign for Liberty stands for, since the very least we demand of our government is fidelity to its own governing document….

Our mission is to promote and defend the great American principles of individual liberty, constitutional government, sound money and non-interventionist foreign policy, by means of education, issue advocacy and grassroots mobilization.

Paul knows what he is about, and it has little to do with attempting to capture the presidency. As he noted in a speech on May 5 in Austin, Texas, to a Tea Party rally:

A true revolution has to be ideological. Revolutions can be violent; they can overthrow a government with nothing really improved. An ideologically positive revolution is what is necessary, and that’s what we have going in this country.

We may lose a battle here or there. But ultimately we are going to win the war because we are winning the hearts and minds of the American people. The real reason for this is that I can’t imagine people not wanting to maximize our chances of having peace and prosperity. That should be our goal. It can be achieved in a free society; it is never achieved in a totalitarian society.

Two questions were left unanswered in Paul’s note to his supporters: what will he do after he leaves his office as Congressman from the 14th District of Texas in January 2013, and who will take his place when his term on Earth has expired?

From all evidence available it is safe to assume that Paul will continue in his role of advocate and champion in the freedom fight, concentrating his efforts on his most likely constituency: young voters just waking up to the mess their elders have left them to solve. He is the supreme marketer of what once were considered “extreme” ideas, and he no doubt has amassed a huge database of e-mail addresses of supporters that can be expanded and employed to the greatest advantage with the freedom message in the future.

As for the standard-bearer when Paul passes from the scene? Many have suggested that his son, Rand, is the likely candidate. Rand Paul doesn’t run for reelection until 2016, which frees him to concentrate on helping others in their quest to secure public office. And his message is the same as his father’s, only with a more nuanced tone. As Brian Doherty, the author of Ron Paul’s Revolution: The Man and the Movement He Inspired, noted:

Rand is way better at sounding that right wing talk radio tone. He can talk to Republicans and Libertarians and sound good to both. At neither time is he being insincere, however; he’s just being politically intelligent about selling himself.

Be that as it may, one thing is certain: The movement Ron Paul inspired will live long after he is gone from the scene. It may just be the movement that finally turns America back to its constitutional roots and into the Republic its Founders meant it to be.

Constitutional Federal Government Freedom Gun Control House of Representatives Liberty NDAA Rand Paul Republican Ron Paul Second Amendment Senate State Budget Tea Party War
This entry was posted on Monday, June 11th, 2012 at 2:28 pm and is filed under Constitution, Politics. You can follow any responses to this entry through the RSS 2.0 feed. Both comments and pings are currently closed.
Many of the articles on Light from the Right first appeared on either The New American or the McAlvany Intelligence Advisor.