In less than 24 hours, Vince Wade’s YouTube video of General Motor’s CEO Dan Akerson’s speech touting the car company’s increasing investment in China has gone viral, with nearly 500,000 views. Noting that GM—derisively called Government Motors by some–received nearly $50 billion of bailout funds in 2009, Wade asked: “Did we bail out General Motors to have it become China Motors?” According to Akerson, GM now:

Our commitment to working in China, with China, for China, remains strong and focused on the future. We’re now building out the advanced technology center which will bring our research and development that is centered largely in the United States…we’re going to diversify that more into China because we think this market is so critically important to the success of our company… [China] is the crown jewel in the GM universe.

As evidence that GM is willing to do business with the Chinese government as long as it’s profitable, Wade notes the largely unknown purchase of GM’s Saginaw Steering Gear facility, now known as Nexteer, for half a billion dollars in 2010, giving the Chinese government ownership of Nexteer’s 22 factories around the world, its six engineering centers, its 14 customer-support centers, along with more than 1,000 patents. Those patents, said Jack Chen, the investment banker at Transworld Capital Group who put the deal together, “dramatically shortens the technology gap between China and the rest of the world.” GM is aggressively marketing its Cadillacs to the top Chinese government officials by sponsoring a propaganda film honoring the beginning of the Communist Party’s takeover in China. Wade quoted an observer attending the initial showing of the film who saw a number of brand new Cadillacs parked out in front of the theater and remarked:

My suspicion is that GM in China is marketing this line of luxury vehicles to CCP (Chinese Communist Party) officials. These are powerful men with a lot of disposable income all wrought from taking wealth from the public. The key activities in the lives of many party officials include finding ways to disgorge these funds: women, gambling, alcohol and luxury cars are central to their lifestyle. And what if Cadillac wanted to become a mainstream part of this club…the vehicle of choice for the underworld mob that runs China? Well, a good way to start would probably be to publicly sponsor a movie about the “great achievements” of the founding of the party, wouldn’t it? 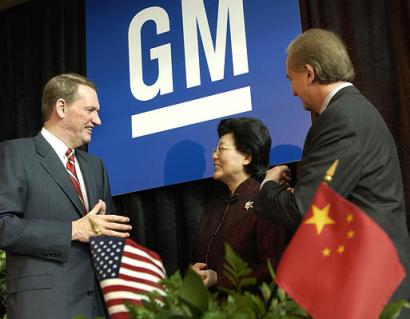 Those “great achievements” have no doubt escaped Akerson’s attention in his drive for profits in China, including heavy government restrictions on freedom of speech, freedom of travel, and freedom of religion. Best known for its absence of legal rights and an independent judiciary, bulwarks of the American system, the Chinese government continues to oppress its people. One need only go back to CCP leader Mao Zedong’s Great Leap Forward and his Cultural Revolution, which resulted in the deaths of tens of millions in the newly enslaved country. But perhaps Akerson isn’t current on his history. He would only have to go back to 2008 when China hosted the Olympics to learn how they do things there. Although its 1982 constitution guarantees freedom of speech, it’s Propaganda Department of the CCP makes sure such freedom isn’t exercised. It promised to issue permits to allow people to protest in “protest parks” during the ceremonies but at the last minute those permits were withdrawn and the people requesting them were arrested. Or Akerson could go back to 2010 when Chinese “dissident” Liu Xiabo—a freedom fighter—was awarded the Nobel Peace Prize while he was serving his fourth term in jail. According to Freedom House,

The government engaged in systematic censorship to prevent news of the prize and Liu’s activities from circulating inside China. It also harassed and detained dozens of other activists and refused to allow anyone to travel to the Oslo award ceremony in December to accept the prize on his behalf.

But perhaps Akerson is too busy making deals with the Chinese whom he hopes will buy his cars to note the fact that China is a communist dictatorship and that the CCP with whom he is willing to deal has a total monopoly on political power in that country, and that its nine-member Politburo Standing Committee sets all government policy. Akerson may not know that the National People’s Congress (NPC) is nothing like the U.S. Congress: it is symbolic only, meeting two weeks a year, just long enough to ratify all legislation proposed by the Politburo. That must explain his blindness. Either he is blind or he has accepted the role of “useful idiot” which defines someone who is a propagandist for a cause whose goals he does not understand, who is being used cynically by the leaders of that cause.

China Constitutional Freedom General Motors Marketing Monopoly Technology
This entry was posted on Thursday, June 7th, 2012 at 11:53 am and is filed under Economics, Foreign Policy. You can follow any responses to this entry through the RSS 2.0 feed. Both comments and pings are currently closed.
Many of the articles on Light from the Right first appeared on either The New American or the McAlvany Intelligence Advisor.