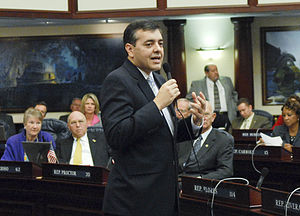 On Wednesday Rep. David Rivera (R-Fla.) introduced his bill, “Studying Towards Adjusted Status Act” or the STARS Act, in an effort to break the logjam over immigration reform and provide a path to U.S. citizenship for children of illegal immigrants.

By his side was the “poster child” for immigration reform, a student at North Miami Senior High School and valedictorian of her class, Daniela Pelaez. She received national attention back in March when a judge ordered her to be deported as an illegal immigrant back to Colombia. Following the order, more than 1,000 of her classmates protested and the issue made headlines across the country. The Obama administration intervened, granting her a two-year temporary stay.

Pelaez represents one of the consequences of a porous, ill-defined and only casually enforced immigration policy. She was born in Colombia but moved to America with her parents when she was four. When the family’s temporary visas expired they simply stayed in the country. Her father eventually became a permanent resident but her mother, who returned to Colombia for medical reasons, is unable to return. Daniela went on to perform brilliantly in her studies and currently boasts a remarkable 6.7 grade point average. She graduates next week and has been accepted at Dartmouth College with a career goal of becoming a heart surgeon.

The STARS Act would allow illegal immigrants like Pelaez to stay for another five years and eventually gain legal status if they earn a college degree and meet other criteria. Rivera said:

This legislation can make the American dream a reality for young people like Daniela, who through no fault of their own, are prevented from realizing their full potential in this land of opportunity.

[The proposed legislation] is the only concrete solution people like myself and other kids in my situation have to stay in the U.S.…

It has everything to offer—my future, the future for my family, my education, my career. [America] is my home. It’s the only thing I know…

There are millions of kids like me. I want to be the voice for all those kids who can’t speak for themselves—to show people in Congress, to show Capitol Hill, there is something wrong with their system and we deserve to be here. Why should we be punished for what our parents did?

Attempts to deal with the immigration issue began with the introduction of the Development, Relief and Education for Alien Minors Act—the DREAM Act—in 2001 by Senators Dick Durbin (D-Ill.) and Orrin Hatch (R-Utah). The issue has been hotly contested and debated to the point where the Republicans had been unwilling to address the issue formally until the introduction of the STARS Act by Rivera.

The STARS Act is restricted in its scope in the hopes that it might gain some traction in Congress. It would allow students who were brought to the United States before age 16, who received their high school diplomas, stayed out of trouble with the law, and were accepted to a four-year college or university. The act would allow them to apply for a five year visa to stay and study in the U.S. and if they graduate they would then be able to apply to stay longer and be put on a path to full citizenship.

Such legislation has drawn sharp criticism in the past with opponents saying that it would encourage and reward illegal immigration and would be unfair to other immigrants who went through the legal channels to become American citizens. As Rep. Ron Paul (R-Texas) said in 2005:

Amnesty for illegal immigrants is not the answer. Millions of people who broke the law by entering, staying, and working in our country illegally should not be rewarded with a visa. Why should lawbreakers obtain a free pass, while those seeking to immigrate legally face years of paperwork and long waits for a visa?

But we rightfully expect immigrants to show a sincere desire to become American citizens, speak English, and assimilate themselves culturally…we should expect immigrants to learn about and respect our political and legal traditions, which are rooted in liberty and constitutionally limited government.

Perhaps the introduction of the STARS Act can begin the conversation that would lead to the development of an intelligent, rational and constitutionally acceptable policy on immigration.

DREAM Act Education Illegal Immigration Liberty Obama Republican Ron Paul
This entry was posted on Wednesday, June 6th, 2012 at 8:27 am and is filed under Constitution, Politics. You can follow any responses to this entry through the RSS 2.0 feed. Both comments and pings are currently closed.
Many of the articles on Light from the Right first appeared on either The New American or the McAlvany Intelligence Advisor.