Wisconsin Governor Walker to Win in a Walk, Polls Show 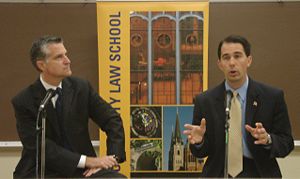 On Wednesday the Marquette Law School poll showed Wisconsin Governor Scott Walker with a comfortable lead over his rival, former Milwaukee mayor Tom Barrett, in next week’s recall election, 52 percent to 45 percent. This was an improvement from their poll taken two weeks earlier when Walker held a six-point lead over Barrett. It was also confirmed by a poll taken on May 23 by We Ask America that showed Governor Walker leading Barrett 54 percent to 42 percent. More telling perhaps was the Intrade site which measures voter sentiment and showed Walker on Thursday with a 94.5 percent chance of winning the recall election.

The recall election process began in November last year when United Wisconsin, a coalition of unions and the state’s Democratic Party, decided to go after Walker because of his success in passing Act 10. That law limited unions’ collective bargaining powers and required that union members pay a little more for their health insurance and retirement benefits. Specifically, Act 10 required members to contribute 12.6 percent of their health care premiums (with the taxpayers picking up the balance of 87.4 percent) and 5.8 percent of their pension costs (with taxpayers picking up the remaining 94.2 percent).

Even after these increases, a study by the American Enterprise Institute showed that state government employees in Wisconsin are still enjoying a significant advantage over those taxpayers, receiving health care benefits that are more than twice as valuable as private sector employees enjoy and retirement benefits nearly five times more generous than similar private sector workers enjoy. Nevertheless United Wisconsin started collecting signatures for the recall effort, obtaining one million signatures and triggering the recall vote scheduled for Tuesday, June 5.

Momentum is clearly in Walker’s favor. On April 23, Walker announced that, thanks to Act 10, the state was already enjoying savings of more than $1 billion. This was followed on May 16 with the announcement from the state’s Department of Workforce Development Secretary Reginald Newson that Wisconsin added more than 23,000 jobs last year.

There is more to the recall effort than just savings and jobs numbers. As Eric Planin of The Fiscal Times pointed out, huge national interest in the election has generated massive infusions into the campaign which has allowed Walker to outspend his union-supported opponent by nearly eight-to-one. In addition, the Wisconsin Republican Party has outhustled the Democrats in orchestrating grassroots meetings and galvanizing likely voters, making more than 2½ million phone calls to generate support for Walker. Even the national Republican Party has invested heavily in the election, having “done more work in this state than in any state in the country,” according to Republican National Committee Chairman Reince Priebus.

In addition, high-profile Republican Governors have made trips to Wisconsin to support Walker’s bid to survive the recall effort, including Chris Christie of New Jersey, Niki Haley of South Carolina, Bobby Jindal of Louisiana, and Bob McDonnell of Virginia.

With Walker’s anticipated vanquishing of Barrett and his union backers on Tuesday, those unions are going to suffer a humiliating defeat and a major setback in their attempt to maintain their enforced extraction of privileges from Wisconsin’s beleaguered taxpayers. This could also be a harbinger for the national election.

Chris Christie Collective Bargaining Democrat Health Care Insurance Jobs Pension Polls Private Sector Republican Retirement Scott Walker State Government Unions
This entry was posted on Monday, June 4th, 2012 at 10:11 am and is filed under Economics, Politics. You can follow any responses to this entry through the RSS 2.0 feed. Both comments and pings are currently closed.
Many of the articles on Light from the Right first appeared on either The New American or the McAlvany Intelligence Advisor.