Attacks on Local Police Could Lead to National Police Force 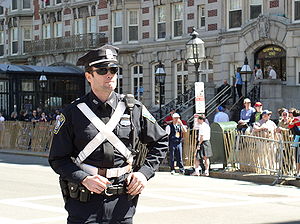 Its website, www.policemisconduct.net, currently lists an increasing number of incidents involving police officers who have stepped outside the bounds of their duty. One after another, incidents such as “Lanagan, MO police chief, officer indicted, suspended for forgery“; “Denver police officer allegedly sexually assaulted a woman during a traffic stop”; and “Dallas City Council approves $500,000 for settlement for motorcyclist whose beating was caught on police dash-cam” are presented on its website in its attempt to educate citizens about such illegal behavior by the men in blue.

Cato says its purposes are honorable: “Only a small fraction of the 17,000 law enforcement agencies [in the country] actually track their own misconduct…and even when they do, the data…is generic and does not specify what misconduct occurred, who did it, and what the end result was.”

The institute obtains its data from all media sources, and the facts are verified by its staff before being posted on the website. Further, the staff working on the project want to be notified by readers of any errors of fact, and are open to receiving information about other incidents reported in the media that they haven’t vetted yet.

Cato staff use media accounts rather than civil or criminal court records because “only a fraction of the incidents that occur actually wind up in litigation” and “very few instances of police misconduct are actually prosecuted.” Besides, most states prevent police departments from releasing such information or else permit them to keep the details secret from the public. Says the Cato website:

This project can help police do their jobs better since gaining the trust of the public helps them gather the information and cooperation they need to do their jobs effectively.

Unfortunately, Cato’s NPMRP website looks more like the supermarket tabloid National Inquirer than it does an effort to present useful information for either the concerned citizen or the serious law-enforcement professional. Perhaps that’s because the project is very new and the staff haven’t fleshed out the results with statistical analysis and conclusions and recommendations. They may also be totally unaware that the project’s apparently sensational presentation of police misconduct may be playing into the hands of those whose interest is in attacking the credibility currently enjoyed by local police officers from the citizens who employ them. By loosening those bonds of credibility, the argument for national control of local police authorities begins to gain traction.

In 1958, in an effort to create a national police force, various means were being employed to convince the populace at large to question police behavior and intentions, so The John Birch Society (JBS) created a project entitled Support Your Local Police  (SYLP) and Keep Them Independent. Art Thompson, CEO of the JBS, explains:

Our goal is to help understand that responsible policing is best done with local oversight. Local police are accountable to local communities and best reflect the interests and priorities of the communities they serve.

Since September 2001, local police have increasingly split their allegiance between local communities and regional and federal agencies that offer funding, so JBS is renewing its efforts to keep policing local.

A month ago The John Birch Society sent out more than 16,000 informational packets to every police chief, sheriff, and state patrol headquarters in the United States. Included in that packet was a reprint from The New American magazine that detailed the attacks on local police from various sources, each attack intended to diminish the credibility of local police. CEO Thompson expanded on the purpose of the SYLP project:

Our system of local police, responsible to the local citizens, is unique in the world. Most countries have a system of national police whose first loyalty is to the national government….

No country can become totalitarian as long as the local citizens have direct responsibility for and control of local police departments. It is one of our essential checks and balances.

While the efforts of Cato to explore and shed light into a relatively obscure part of the law-enforcement profession—the misconduct by a few of its members—are to be commended, it is hoped that they do not end there. Instead, Cato should recognize that they may be running dangerously close to promoting the same theme pushed by those seeking to separate the citizen from his local police department in their quest to create a national, or federal, police force.

In Nazi Germany, that police force was called the Gestapo.

Cato Institute Conservative Jobs John Birch Society National Socialism The New American
This entry was posted on Thursday, May 31st, 2012 at 5:07 pm and is filed under Constitution. You can follow any responses to this entry through the RSS 2.0 feed. Both comments and pings are currently closed.
Many of the articles on Light from the Right first appeared on either The New American or the McAlvany Intelligence Advisor.