New Evidence that Obama Was Born in Kenya is Explained Away 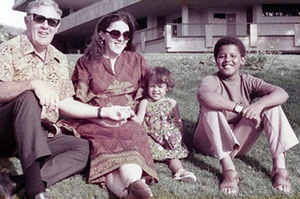 When Joel Pollak, a columnist for Brietbart.com, exposed his findings that a biographical sketch of Barack Obama in 1991 stated that he “was born in Kenya and raised in Indonesia and Hawaii,” senior management deemed it prudent to distance itself from the “Birther” issue with this disclaimer:

Andrew Breitbart was never a “Birther,” and Breitbart News is a site that has never advocated the narrative of “Birtherism.” In fact, Andrew believed, as we do, that President Barack Obama was born in Honolulu, Hawaii, on August 4, 1961…

[The biographical sketch that we discovered] is evidence—not of the President’s foreign origin, but that Barack Obama’s public persona has perhaps been presented differently at different times.

The sketch, contained in a 36-page promotional booklet along with those of 89 other authors, was designed to target interested persons in the publishing industry about upcoming books by the authors. Obama at the time was promoting a book entitled Journeys in Black and White that he failed to complete. But the booklet remained in the public domain from 1991 until April 2007 when it was “corrected.” In another release by Brieitbart, the original language of Obama’s bio read:

BARACK OBAMA is the junior Democratic senator from Illinois and was the dynamic keynote speaker at the 2004 Democratic National Convention. He was also the first African-American president of the Harvard Law Review. He was born in Kenya to an American anthropologist and a Kenyan finance minister and was raised in Indonesia, Hawaii, and Chicago…

But two months after Obama launched his presidential campaign in February of 2007, the bio, then 16 years old but still available on the Internet, was changed:

BARACK OBAMA is the junior Democratic senator from Illinois and was the dynamic keynote speaker at the 2004 Democratic National Convention. He was also the first African-American president of the Harvard Law Review. He was born in Hawaii to an American anthropologist and a Kenyan finance minister and was raised in Indonesia, Hawaii, and Chicago…

Another conservative commentator distancing himself from any discussion that such revelations lend credence to efforts of “Birthers” to expose Obama’s real background was Erick Erickson of RedState.com:

I do not believe Barack Obama was born in Kenya. I don’t think it matters even if he were born overseas because his mother was an American citizen. I’m not going to debate it with the cult of birtherism…

And then, in perfect sync with the mainstream media’s proven efforts to direct attention away from the “third-rail” of “Birtherism,” Erickson goes on to list extensively other changes, modifications, amplifications and glorifications of Obama’s past that he has made, or has allowed to be made for him, in order to create and maintain his unique “persona” in keeping with the mainstream media’s sugar-coated view of the Chicago politician. That way Erickson redirects the conversation away from the “Birther” issue and focuses instead on something less painful and volatile and risky.

The media has known about Obama’s Kenya background for years. The Associated Press published an article about Obama when he was running for the Illinois Senate in 2004 which appeared here with the headline: “Kenyan-born Obama all set for US Senate,” going on to explain that:

Kenyan-born US Senate hopeful, Barrack [sic] Obama, appeared set to take over the Illinois Senate seat after his main rival, Jack Ryan, dropped out of the race on Friday night amid a furor over lurid sex club allegations.

Which is why attempts to explain away the Kenyan reference in the bio exposed by Breitbart ring hollow. The literary agent involved in writing the bio for Obama, Miriam Goderich, claimed that “this was nothing more than a fact checking error by me—an agency assistant at the time. There was never any information given to us by Obama in any of his correspondence or other communications suggesting in any way that he was born in Kenya and not Hawaii. I hope you can communicate to your readers that this was a simple mistake and nothing more.” [Emphasis added.]

A sixth-grader could see through this. If there was never any information given to her about Kenya then how did that information get into the bio? Did she just make it up? And if it was an error how did it get past the screening and editing process? And how did the “error” remain uncorrected for 16 years? And why was it suddenly corrected two months after Obama announced for the presidency? According to Erickson and Brietbart: There’s nothing to see here—just move along!

The promotional booklet published in 1991 that was just brought to light and the response to it by some prominent members of the so-called “conservative” alternate media tell much more about them than it does about the current occupant of the White House.

2012 Elections Andrew Breitbart Conservative Constitutional Democrat Fraud Mainstream Media Media Bias Obama Scandal Senate
This entry was posted on Sunday, May 27th, 2012 at 4:21 am and is filed under Constitution, Politics. You can follow any responses to this entry through the RSS 2.0 feed. Both comments and pings are currently closed.
Many of the articles on Light from the Right first appeared on either The New American or the McAlvany Intelligence Advisor.