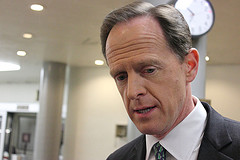 With the October 1st deadline for a budget for 2013 approaching rapidly the Republicans in the Senate yesterday forced a vote on five different budgets, and each was voted down. Four of them were presented by Republican senators, while the fifth was based on President Obama’s budget

None of them passed, including the president’s which was voted down unanimously, 99-0. Sen. Patrick Toomey’s (R-Pa.) plan garnered 42 votes while Rep. Paul Ryan’s (R-Wisc.) captured 41 votes. Sen. Mike Lee (R-Utah) saw his plan gather only 17 votes, just ahead of the plan offered by Sen. Rand Paul (R-Ky., right, Senate photo) which received 16 votes.

My colleagues on the other side refuse even to debate our fiscal crisis, let alone introduce a fiscal blueprint for solving our country’s problems. Instead of lobbing political attacks at the ideas I and my Republican colleagues have put forward, it is incumbent upon the majority party to put forward ideas of its own. Anything less is a flagrant abdication of its governing responsibility.

Democrats won’t agree to a one-sided solution that lets the superwealthy off the hook while forcing the middle class to bear all the hardship. These four stunt budgets all take that one-sided approach.

On the surface, Paul’s budget looks to be the most aggressive, with the budget projected to balance within a few years while eliminating the Departments of Commerce, Education, Housing and Urban Development, and Energy. It would create a 17 percent flat tax and begin to make substantial entitlement reforms.

The Heritage Foundation actually found a little daylight in the budget defeats, saying that even though the budgets had little chance of success, the very fact that they were being pressed to a vote by the Republicans was a good sign. Heritage called the Republican plans “serious proposals” that closely mimicked its own “Saving the American Dream” plan which would limit the growth of government spending, make major reforms to the various entitlement programs that are bleeding the country to death, and simplifying the tax code.

On the other hand, author Laurence Vance laughed off Heritage’s suggestion that the Republicans’ plans were serious. Instead he called “Saving the American Dream” a “bloated, unbalanced, fiscally irresponsible, mostly unconstitutional path toward, and blueprint for, the welfare/warfare state.” He noted that the official Republican proposal authored by Paul Ryan, if enacted, would increase spending by a trillion dollars over the next ten years and would add another $4.5 trillion to the national debt over that span. Instead, “from a libertarian, constitutional, limited government perspective, here are six key elements to a successful federal budget”:

The fact that the proposals offered by Republicans and voted down so resoundingly by Democrats shows how far away from reality both parties are from considering what really needs to be done to right the ship of state. If Congress fails to do so, the bond market will. Sen. Mike Lee made that point abundantly clear:

[The budget stalemate] will end one way or another in the U.S. government balancing its budget. But how we get there matters. If we wait until the bond market forces us into a position of immediate balance, the result will be destructive…it will be devastating.

2012 Elections Democrat Entitlements Flat Tax Harry Reid Heritage Foundation National Debt Paul Ryan Rand Paul Republican Senate Spending Taxes
This entry was posted on Wednesday, May 23rd, 2012 at 4:13 am and is filed under Economics, Politics. You can follow any responses to this entry through the RSS 2.0 feed. Both comments and pings are currently closed.
Many of the articles on Light from the Right first appeared on either The New American or the McAlvany Intelligence Advisor.