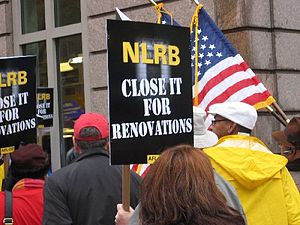 On Monday, U.S. District Court Judge James Boasberg ruled against the National Labor Relations Board’s (NLRB) “ambush rule” that would greatly shorten the time an employer had to defend against an effort to unionize his business, from 42 days to 10 days.

With five board members, the NLRB needs a quorum of three to pass any “administrative” rules but when the “ambush rule” was promulgated by the union-friendly board, only two were present. Said Boasberg:

According to Woody Allen, 80 percent of life is just showing up. When it comes to satisfying a quorum requirement, though, showing up is even more important than that. Indeed, it is the only thing that matters—even when the quorum is constituted electronically. In this case, because no quorum ever existed for the pivotal vote in question, the Court must hold that the challenged rule is invalid.

The rule would clearly have favored unions in that it would greatly shorten the time an employer would have to promote his side of the issue. According to labor policy specialist Vincent Vernuccio at the Competitive Enterprise Institute, union efforts to persuade employees to join a union begin months in advance of any formal demand for a vote. Shortening the time to respond to less than two weeks gives unions an unfair advantage. And Bloomberg Government noted that when unions are able to force elections within 15 days of their demand for a vote, they are successful in unionizing the company 87 percent of the time, but when the employer is given five or six weeks to present the other side, unions succeed less than 60 percent of the time.

As noted by the AFL-CIO on its blog, the judge’s ruling just delays things briefly in the NLRB’s march to unionize private employers. Said their general counsel, Lynn Rhinehart: “The judge’s ruling, while in our view incorrect, is solely based on technical issues that speak to the procedure of the board and not the rule itself.” Indeed, the judge agreed with Rhinehart in his decision: “Nothing appears to prevent a properly constituted quorum of the Board from voting to adopt the rule if it has the desire to do so.”

And that is the core issue: the “properly constituted forum” of board members may be hard to find. Three of the five current members of the board were “recess appointments” made by President Obama in January while the Senate was in session, thus constitutionally illegal. The U.S. Chamber of Commerce has brought suit challenging those appointments, as explained by Chamber president Tom Donohue:

Appointing three of five members to the NLRB in a legally questionable way casts doubt on the work of the entire agency. We cautioned in January that shoehorning these nominees into office in this controversial way would throw the legal validity of every decision of the Board into question.

Our concern has now become a reality.

Senator Michael Enzi (R-Wyo.), a member of the Senate Health, Education, Labor and Pension Committee, added: “The president has ignored the Senate’s confirmation and vetting process,” which made it impossible to do proper vetting of the nominees—checking to see if they’ve paid their taxes, aren’t convicted felons and are free of conflicts of interest. At least one of the three appointments, Richard Griffin, clearly fails the smell test. Prior to his appointment he was general counsel for the International Union of Operating Engineers, and has served on the board of directors for the Lawyers Coordinating Committee of the AFL-CIO.

Senator Enzi offered a resolution to put the whole matter to bed by nullifying the ambush rule with a simple majority vote in the Senate. On April 24 his resolution failed along party lines, 54-45, with every Democrat plus two “independents” voting against it.

This is how Leviathan grows: An extra-legal entity (the NLRB, created in 1934 during a fit of excessive government-can-solve-everything-that’s-wrong mania under the Roosevelt administration) issues a rule. It fails even to follow its own rules in doing so, but the mess that is created is then left to the Congress and the courts to “resolve.”

AFL-CIO Chamber of Commerce Competitive Enterprise Institute Democrat NLRB Obama Pension Senate Unions
This entry was posted on Monday, May 21st, 2012 at 9:10 am and is filed under Politics. You can follow any responses to this entry through the RSS 2.0 feed. Both comments and pings are currently closed.
Many of the articles on Light from the Right first appeared on either The New American or the McAlvany Intelligence Advisor.