Eurozone Teetering on the Edge of Recession 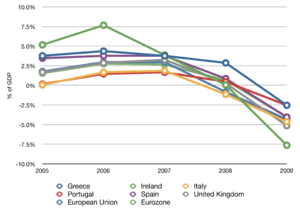 With economists predicting the start of an official recession in Europe, the latest numbers from the European Union’s statistics agency, Eurostat, show that the recession hasn’t been confirmed, at least not yet.

Without Germany’s slightly better economic performance in the first quarter, however, the recession would be official. Two quarters of “negative growth”—or rather shrinkage—is the usual definition of a recession, and it appears that the official declaration will have to wait until July. Germany was expected to grow at a paltry annualized rate of 0.1%—barely perceptible—but instead grew by a modest 0.5% in the first quarter, which followed a 0.3% contraction in the last quarter of last year. Some economists had the audacity to call this a “strong economic performance” by Europe’s powerhouse, but a closer look at the real numbers reveals how close a call it was and that it’s just a matter of time before the economists finally recognize the reality that real people in the real world in Europe have been facing for years.

For example, France’s growth was nil—nada, zip—compared to the last quarter and to the first quarter of last year. In other words, the second largest economy in the Eurozone, has been treading water for a year. There were three other “winners” in the GDP wars: Austria, whose economy grew by 0.2%, Belgium’s, whose economy grew by 0.3%, and Finland, which sported growth of 1.3%. Everywhere else the numbers were negative.

Italy has been in an official recession and is suffering from an economy that is shrinking by 0.8% (even worse than expected), while Spain officially entered recession with its shrinkage of 0.3% for the second straight quarter. The Netherlands’ economy shrank as well by 0.2% along with the Czechs’ economy which declined by 1.0%, Hungary’s by 0.7%, and Romania’s by 0.1%. And Greece continues to bring up the rear, having been officially in a recession for the past five years, and scoring a negative growth of 6.2% over the last twelve months.

There’s nothing on the horizon that is likely to change things for the better, either. A spokesman for ThyssenKrupp, Germany’s largest steel manufacturer said there is “no sign of recovery in Europe” as it continues to operate at less than full capacity due both to weak demand and declining prices.

Politically France is holding its collective breath to see what the new hard-left president François Hollande is going to be able to accomplish. After promising the impossible, which included more spending in place of the modest austerity imposed by former president Nicolas Sarkozy along with a balanced budget by 2017, he is about to face the reality that he cannot achieve both.

And with a recent local election loudly denouncing German Chancellor Angela Merkel’s support of the European Union and its threat to German prosperity, the noisy proclamation of further cuts in government spending in order to quality for more bailout funds from the European Union are likely to be muted.

Simply put, the latest numbers show the European Union’s economy on the knife-edge of recession. With taxpayer pushback against austerity imposed by unelected elites increasing, more government spending in true Keynesian fashion is likely to reverse any slight reductions in the size, reach or cost of government. Not a single economist can be found with the only answer to growth: restore the free market and let its cleansing of wasteful projects and rebalancing of regular commercial activity begin. Years ago, long before the European Union was fastened onto those unhappy economies, economic growth reaching nearly double digits was the norm. Now it appears that the new norm is nothing, nada, zip, zero.

Austerity Balanced Budget Economy Elite Establishment European Union Eurozone France Free Market GDP Germany Greece Italy Keynesian Portugal Recession Spain Spending Statistics
This entry was posted on Friday, May 18th, 2012 at 11:57 am and is filed under Economics. You can follow any responses to this entry through the RSS 2.0 feed. Both comments and pings are currently closed.
Many of the articles on Light from the Right first appeared on either The New American or the McAlvany Intelligence Advisor.