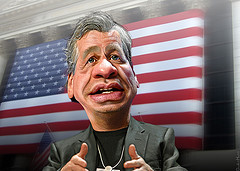 Last week’s revelation by JPMorgan Chase’s CEO Jamie Dimon that the bank’s trading desk has suffered a $2 billion loss was followed on Monday by the resignation of three key players involved in the trade that went bad. The Chief Investment Office (CIO), Ina Drew, along with two of her associates, announced their retirements from the bank.

It was just two months ago that questions about risky trades being undertaken at JPM were passed off by Dimon as a “tempest in a teapot,” but on Sunday, on NBC’s Meet the Press, Dimon admitted that he “was dead wrong” and added:

We made a terrible, egregious mistake. There’s almost no excuse for it. [We] hurt ourselves and our  credibility [and expect to] pay the price for that.

Dimon and JPM are used to paying the price for their past errors and misdeeds. In December 2002, the bank paid $80 million as part of a $1.4 billion settlement involving 10 banks that deceived investors with biased research.

In 2003, the bank paid more than $2 billion in fines and settlements to investors and the Securities and Exchange Commission (SEC) for their role in fraudulently financing Enron Corporation that collapsed in 2001.

In March 2005, the bank paid another $2 billion following its involvement in underwriting some $15 billion of WorldCom’s bonds.

There’s more: In November 2009, JPM agreed to a $722 million settlement with the SEC over their involvement in a “pay to play” scheme where Jefferson County, Alabama, was brought to the brink of bankruptcy through fraud and excessive fees to be charged on refinancing the county’s sewer bonds.

And more: In January 2011, JPM admitted that it deliberately overcharged some 6,000 active-duty military families for their mortgages and illegally foreclosed on 18 of those families. At the time Dimon apologized for the “error” and sent one of his associates, chief lending officer Dave Lowman, packing.

Dimon was deliberately opaque in discussing the trade that went sour, saying only that it came from trading in derivatives that were designed to reduce the bank’s risks on some of the bank’s massive debt holdings in Europe. Dimon said he intended to get to the bottom of the matter and “learn” from the mistake.

While it’s doubtful that either Dimon or the bank will “learn” anything from the trade, some have suggested that the bank was “reaching for yield” by taking on excessive risks, reflecting the zero-interest-rate environment being promoted by the Federal Reserve. The bank has nearly $750 billion in “excess cash” and the trade appeared to be a bet that certain European bonds would decline in value over a specific time frame, and when they didn’t, the bank was faced with huge margin calls to cover their position. As losses escalated, Dimon finally decided to close the trade, take the loss, and announce the results publicly.

Predictably various parties with an interest in expanding government control expressed chagrin and horror at the losses (expected to reach $3 trillion by the time the trade is completely settled) and used the incident to promote their agenda. White House spokesman Jay Carney said, “There is an investigation into what happened at JPMorgan that the SEC is conducting,” while European Union commissioner Michel Barnier, said that “the issue does not only underline the failure of good risk management … but [it] might also raise questions on external supervision.” He added: “More internal and external controls and supervision are needed. Supervisors need to be more proactive on this front.”

The progressive Campaign for America’s Future got the problem right and the solution wrong:

When banks are so big they assume government will bail them out, the excesses can be catastrophes. It’s time for the government to place sensible limits on the big banks.

Robert Brorosage, CAF’s co-director, knew just the remedy: the “Safe, Accountable, Fair & Efficient (SAFE) Banking Act of 2012” offered by Senator Sherrod Brown, chairman of the Senate Banking Subcommittee on Financial Institutions and Consumer Protection. SAFE would put limits on the amount of leverage banks can use in making bets, as well as on how large they may be allowed to grow.

On the other hand, Dan Amoss of the Daily Reckoning made this suggestion:

Here’s an idea: it’s called “capitalism.” Take away the subsidies and bailouts for banks, along with the regulatory red tape. If they want to blow themselves up, fine — but losses would fall on the risk managers making those decisions and bank shareholders, not taxpayers or depositors….

Then, with the senior partners’ capital on the line, we’ll see how many derivatives blowups occur.

It’s worth noting in passing that Ina Drew, the woman in charge of the division that made the trade that’s blowing up, is scheduled to receive, according to JPMorgan’s last proxy statement, approximately $14.7 million in the event of her resignation, on top of her annual compensation package worth an estimated $15 million. And Dimon himself is enjoying annual compensation well in excess of $20 million as he continues to promise reform and good behavior in the future.

Bailouts Banking Bankruptcy Environment European Union Fraud JPMorgan Chase Military Regulations Regulatory Agencies SEC Senate Subsidies Too Big To Fail
This entry was posted on Wednesday, May 16th, 2012 at 4:14 am and is filed under Economics. You can follow any responses to this entry through the RSS 2.0 feed. Both comments and pings are currently closed.
Many of the articles on Light from the Right first appeared on either The New American or the McAlvany Intelligence Advisor.