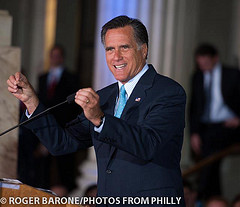 Eric Fehrnstrom joined Republican presidential candidate Mitt Romney’s campaign in 2002 when he was running for governor of Massachusetts. Today he is not only the most experienced member of Romney’s current staff, he is also the one closest to the candidate.

Fehrnstrom is usually referred to as a “Romney spokesman” or “strategist” while Romney himself refers to him as his “communications director,” but those close to the campaign call him Romney’s “consigliere”—an intimate counselor or advisor—whose job is not only to give advice and counsel to his patron, but to shield him from attacks and present him as something different than what he is: a mild-mannered patient man with little experience or interest in street fighting. That’s where Fehrnstrom comes in.

Before getting the call from Romney in 2002 Fehrnstrom was a reporter working the police beat for the yellow journal paper owned by Rupert Murdoch, the Boston Herald. When he showed some talent for going for the jugular in local politics, he moved into political reporting where, as his mentor at the paper Howie Car put it: “The Herald was like the schoolyard bully. We were all about finding people and kicking them when they were down. And then we’d laugh about it.”

In 1988 when Michael Dukakis was running for president he cherished and cultivated his image as a fiscally competent candidate, one well-qualified to move into the White House and begin to solve some of the nation’s nascent fiscal problems. Fehrnstrom did so much extensive and damaging research into Dukakis’ real background that it became a liability rather than an asset and in the November election, Dukakis lost to George H.W. Bush taking 426 Electoral College votes to Dukakis’ 111 in a landslide.

Fehrnstrom enjoyed taking every advantage he could, without shame, guilt, or remorse. In 1989, Fernstrom learned that Evelyn Murphy, Dukakis’ lieutenant governor, who was running as a Democrat for governor of Massachusetts, was vacationing in Sanibel Island, off Fort Myers, Florida. He flew down to stake her out and was able to get a picture of her doing some jogging in unflattering attire. That picture made it onto the Herald’s front page which Fehrnstrom later described deliciously as showing “her middle-aged thighs flouncing across 300,000 newspapers” which helped end her political career.

Fehrnstrom enjoyed his new role as career assassin. He wrote in 1999 that:

We political writers…were in fact a sort of underworld mob unto ourselves. We figured most pols were overdue in their accounts with the devil anyway.

In my trade, politics was never personal. [Politicians] were rarely people—they were ducks in a shooting gallery.

In a moment of clarity that revealed not only his human sensitivity but also his willingness to go along with the dirty business of politics, Romney expressed regret about Fehrnstrom’s decision to remove one of Romney’s close friends from his campaign when it was discovered that he had purchased some real estate from a company with ties to organized crime. William Monahan described the call he received from Fehrnstrom telling him he was history: “He was very, very forceful and very abrupt. It was just, BANG, you’re out.” When Monahan tried to appeal directly to Romney for a little forgiveness, he remembered Romney’s response: “He said his stomach was turning and that he didn’t want to [fire me] but that his senior staff was unanimous that he had to ask for my resignation. He said he didn’t want to do this but that he was outvoted.” (emphasis added)

In a nutshell that is Fehrnstrom’s real role: doing the dirty work behind the scenes that Romney himself finds distasteful but necessary. And if he can make Romney appear more forceful and determined in his public image in the process, so much the better.

In late January the Romney campaign was reeling from a Gingrich victory in South Carolina and was determined to do whatever they could to turn the Florida primary into a Gingrich rout. As the New York Times put it, the campaign developed “lines of attack that could goad Mr. Gingrich into angry responses.” They infiltrated Gingrich’s own meetings to challenge him at every turn and to disrupt them. Said the Times,

[Romney’s campaign] pressed everything at its disposal into service to eviscerate Mr. Gingrich, painting him as an erratic, unreliable Washington insider in mailings and television advertisements…[even sending] ample and vocal supporters to mock him at his own events.

Fehrnstrom and his cadre watched and listened to Gingrich hoping to find a chink, an entry, an opening, that would serve their purposes. Just hours before a critical debate, Gingrich gave away his hand by challenging Romney for holding investments in Fannie Mae and Freddie Mac in an attempt to link him to those government-owned examples of Washington mismanagement. Springing into action, Ferhnstrom quickly discovered that Gingrich also owned shares of those same entities and Romney, under the advice of his debate coach, attacked Gingrich with the new information. It was a blow that effectively signaled the beginning of the end of Gingrich’s campaign as Romney took 46 percent of the vote to Gingrich’s 32 percent.

Now Fehrnstrom’s attention is directed at President Obama. In typical fashion, he created an attack ad that used video from October 2008 of Obama addressing an audience in New Hampshire, using words from a John McCain campaign advisor to make it appear that they were being spoken by Obama himself. When questioned about the highly misleading attack ad, Ferhnstrom stepped to the plate to defend it:

It’s all deliberate. It was all very intentional. They should probably order some more defibrillators for the Obama reelection committee, because their reaction was quite hysterical. But that was the point.

As noted previously, candidate Romney’s campaign is being guided from the inside by numerous members of the Council on Foreign Relations who will keep him true to their purpose and on course to continuing the destruction of the republic. With help from people like Fehrnstrom any suggestion that the upcoming campaign will be anything other than nasty, degrading and dirty, with little regard to the critical issues facing the republic, will turn out to be just plain silly. As one veteran Romney observer said: “I can just see Eric in Karl Rove’s old office upstairs at the White House now.”

Council on Foreign Relations Democrat Fannie Mae Freddie Mac John McCain Obama Real Estate Republican Video
This entry was posted on Tuesday, May 15th, 2012 at 4:16 pm and is filed under Politics. You can follow any responses to this entry through the RSS 2.0 feed. Both comments and pings are currently closed.
Many of the articles on Light from the Right first appeared on either The New American or the McAlvany Intelligence Advisor.