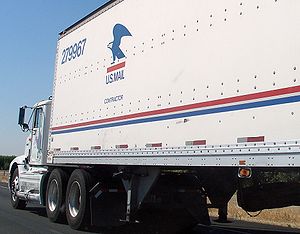 Despite faint whispers of sanity from a few members of the House, the Senate is determined to keep the postal service afloat in its present form, regardless of cost. At present the service is running in the red at the rate of $33 million every day but since it’s taxpayer’s money, the Senate doesn’t care. Said House Representative Dennis Ross (R-Fla.)

If the post office was a business, it would be in bankruptcy. It’s insolvent.

Over the last six years, the Post Service lost 25 percent of their revenues. We as a Congress have to look at the fact that the post office is not in the 21st century. It’s still 50 years behind and we have to bring it up, modernize it and allow it to take advantage of market trends.

And that is the mantra from Washington, even from “conservatives” like Ross: “We can fix this. We can make this work. Trust us. We know how.”

No, they don’t. The Postmaster General has a good handle on the problems facing his company and has studied successes in the delivery service business, such as UPS and FedEx. He knows how Walmart works, and has offered an extensive agenda of “fixes” to bring costs into line with declining revenues.

In an interview with the Heritage Foundation last October Rep. Darrell Issa (R-Calif.) claimed that if these measures were instituted, the post office might actually be able to turn a profit of $2 to $3 billion a year, instead of losing $10 to $15 billion. But even a staunch conservative like Issa has little interest in considering that the only way to “save” the post office and make it viable is to sell it, lock, stock and barrel. The problem isn’t with the post office. The problem is with Congress. Neither the Senate nor the House has any interest in doing anything more than continuing to pump taxpayer money into it. As Gary North noted in a recent members’-only newsletter (delivered electronically):

Congress will vote to keep spending, despite the fact that even the agency that is doing the spending [the Postal Service] recognizes that there must be budget cuts.

How much support for budget cuts in any other federal agency can we expect in the future? When senior managers are willing to admit that their organizations are out-of-control fiscally, and they try to do something about it, the United States Senate decides by an overwhelming majority to tell those senior managers to stop the budget cuts, and, by the way, here is a pile of money, so that you will not have to make any more of these cuts…

Congress has no intention of cutting anybody’s budget.

Conservative Darrell Issa Gary North Internet Jobs Post Office Private Sector Senate Spending USPS
This entry was posted on Friday, May 11th, 2012 at 4:30 pm and is filed under Economics, Politics. You can follow any responses to this entry through the RSS 2.0 feed. Both comments and pings are currently closed.
Many of the articles on Light from the Right first appeared on either The New American or the McAlvany Intelligence Advisor.