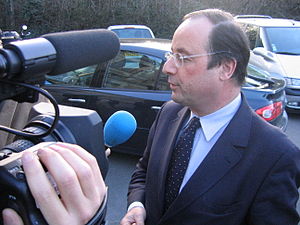 By a three-point margin, French citizens replaced President Nicolas Sarkozy with the Socialist and Radical Left Party candidate, Francois Hollande. Hollande, a former mayor of Tulle (pop. 15,000) and then president of Correze (pop. 242,000), beat Sarkozy 51.9% to 48.1%, resulting in the first Socialist president of France since Francois Mitterand left that office in 1995. With Socialist Party majorities in the upper house of parliament and two-thirds of all French towns, a win by the party in the upcoming June elections in the lower house would give the Socialist Party “more levers of power than ever in its 43-year modern history,” according to NewsMax.com.

With such control, Hollande knows exactly what he is going to do: apply what France is already suffering from, only more so. He wants to spend more money even in the face of the agreement recently signed with German Chancellor Angela Merkel to cut spending in order to save the banks and the euro. His campaign slogan, “Austerity is not inevitable,” Hollande is persuaded that he can do the impossible: spend more and balance the budget at the same time. He plans to:

When President Sarkozy announced he was going to run for a second term back in February he attacked Hollande’s proposals claiming that with them, Hollande would bring about an “economic disaster within two days of taking office.”

The inherent foolishness of spending more while simultaneously raising the cost of energy, putting minimum wage earners out of work and punishing job creators entirely escaped the attention of fawning Keynesian economists who think Hollande’s proposals are just what the French economy (just downgraded by Standard and Poor’s rating agency), needs. Jeffrey Bergstrand, a professor of finance at the University of Notre Dame, said it’s a good thing that Hollande will push for more spending to stimulate the economy. Europe, he said, is “going into a really serious and poor situation…[and Hollande] is going to become the speaker for those countries that want to do something about economic growth.”

The fact that such strategies failed to work for the last Socialist president, Mitterand, in the late ‘80s, didn’t faze him. Within two years of his presidency, Mitterand’s Keynesian attempts to stimulate the economy through the nationalization of key firms and costly “Grands Projets” resulted in three devaluations of the French franc in just two years.

The first agreement France and Germany imposed on the European Union, the Stability Pact in 1997, threatened to punish any EU countries that overspent and ran deficits of more than 3% of their gross domestic product in any year, or total national debt exceeded 60% of their GDP. At that time France forced Germany to change the name to the “Stability and Growth Pact” but nothing else—it was just a label disguised to placate the uninformed.

Six years later, Germany and France were the first to exceed those targets and the EU did nothing about it, thus guaranteeing to others that “spending their way to prosperity” without regard to limits would carry no consequences.

Following the global recession Germany persuaded the Eurozone states to adopt austerity measures under another agreement, the Fiscal Compact,  that set even tighter restrictions. And it is electoral pushback against these austerity measures that has resulted in Sarkozy being the 11th Eurozone leader to be removed from office since 2009.

Merkel has having troubles of her own having lost her party’s Christian Democrats majorities in four states in two years and putting her own position as Chancellor at risk. And in Greece, parliamentary elections over the weekend have also put the ruling majority favoring continued austerity there at risk. The rising tide of discontent that could result in ill-conceived efforts to stimulate have put the debt markets on high alert. In a note to clients, Citigroup warned:

Even considering the push for a growth agenda among European leaders, including newly elected French President François Hollande, we see significant potential for a new Greek government to miss the next round of targets and a rising risk of a Greek exit (“Grexit”) from the euro within the next 12 to 18 months, and increase our probability of this occurring from 50% to between 50%-75%.

The voters in France wanted change and they’re going to get it, good and hard. As citizens in the United States have discovered to their chagrin, not all change is good.

Austerity Christian Democrat Economy Energy European Union Eurozone France Germany Greece Keynesian Minimum Wage National Debt Recession Socialism Spending Taxes
This entry was posted on Thursday, May 10th, 2012 at 3:54 pm and is filed under Economics. You can follow any responses to this entry through the RSS 2.0 feed. Both comments and pings are currently closed.
Many of the articles on Light from the Right first appeared on either The New American or the McAlvany Intelligence Advisor.