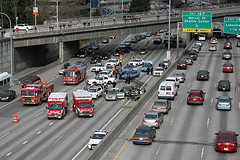 When two elderly sisters were attacked by a thug with a knife in an attempted carjacking in Madison, New Jersey, on Monday, they were lucky things didn’t go awry.

The ladies, who wished to remain anonymous, aged 93 and 94, had parked in the lot outside of a CVS Pharmacy and went inside to pick up some prescriptions. They left their car unlocked, which allowed a local thug, Sergio Fernando Solorzano-Vasquez, to climb into the back and wait for the sisters to return. When they returned he attacked them with a knife.

The thug got a surprise when the older sister, in the driver’s seat, reached around and struck the assailant with her right arm while the younger sister jumped out of the car and started screaming. The thug made the right decision and ran from the car and the scene but not before three surveillance cameras got him on film. He was quickly arrested and taken into custody.

The sisters were lucky, and plucky. They were in what Jeff Cooper taught was “condition white,” oblivious to any dangers that might be nearby and therefore unprepared for the attack. For years Cooper trained thousands to avoid condition white as potential miscreants, like Vasquez, are trained to look for people existing “in their own world” and therefore vulnerable to a surprise attack.

But the sisters had something going for them which, in this case, protected them from serious or even fatal injury: the determination not to become a victim. Cooper and others believe that this is a decision that most people don’t make until it’s too late, but can be made well in advance of any threat. Rather than rely on luck or pluck the sisters were saved by their innate determination to resist and protect themselves.

The next rule Cooper and other self-defense experts teach is to create a noisy disturbance when an attack is imminent. Happily, the younger sister was in good voice that day, and her screaming so unnerved the punk that he exited the car in great haste, thus ending the attack.

Other carjacking attempts don’t end so well. In Clayton County, Georgia, a carjacker entered a black Honda Accord which had pulled to a stop at an intersection and pulled the driver from the front seat and drove away, leaving the driver stranded and panicked. This goon had planned to take the car and use it to commit another crime when officers saw him and, after exchanging gunfire with him, ended his rampage after he was hit by officers’ bullets.

In this case the driver made the same mistake as the two sisters: living in condition white. He also left his car unlocked, even while driving, giving his attacker all the advantage: surprise and physical intimidation. It’s unclear from the record whether the driver even had a chance to defend himself as most carjackings take place typically within five or ten seconds. He also was lucky, as the thug was armed and intended to inflict additional attacks on others before being shot by the police.

A third recent carjacking is also instructive. On April 23, 2009, a female driver pulled her Toyota into a local gas station in St. Louis, Missouri and when she returned to her car, Harold Ford, a felon who had just been released after serving 18 years of a 20-year sentence (for carjacking!) was waiting for her. He forced her to drive him to another convenience store and took her inside, forcing her to pay for his cigarettes. After taking her cellphone and driver’s license, he left her with instructions not to call the police or he would be making a midnight call on her at her home.

She reported the incident to the police who spotted her Toyota two weeks later being driven by Ford, and the situation, like the one in Clayton County, also ended with an exchange of gunfire that put Ford back in prison for another 37 years and forced the retirement of one of the two arresting officers who was shot by Ford during the confrontation.

Like the two other incidents, she was also in condition white, totally unprepared for a life-threatening attack. One can imagine the victim’s frame of mind when faced with an armed hood with nothing to lose. She was out of options and became his cooperative victim during the incident.

The California Distance Learning Project’s website offers some simple rules to follow for those inclined to live in condition white:

Snopes suggests that drivers should be aware of high-potential areas for carjackings such as car washes and ATMs while the Crime Doctor suggests:

Crime Gun Control Retirement Second Amendment Toyota
This entry was posted on Friday, May 4th, 2012 at 4:51 am and is filed under Constitution. You can follow any responses to this entry through the RSS 2.0 feed. Both comments and pings are currently closed.
Many of the articles on Light from the Right first appeared on either The New American or the McAlvany Intelligence Advisor.