Wisconsin Recall Election to be Shaped by Job Numbers 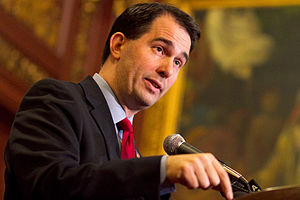 With little more than a month to go until Wisconsin Governor Scott Walker faces his recall vote, unions and their supporters are pulling out all the stops to replace him with one of their own.

Writing for the pro-union newsletter The Progressive, its political editor Ruth Conniff decried every major piece of “Act 10”—the highly contested Budget Repair Bill that Walker finally got passed by the Wisconsin legislature last March—saying that “If you want a preview of the Mitt Romney/Paul Ryan plan for America, take a look at Wisconsin:

So where does this blueprint leave us?

Wisconsin is now dead last in the nation, according to the Bureau of Labor Statistics, for job loss.

Between January 2011 and January 2012, while 44 states and the nation as a whole were adding jobs, Wisconsin was one of only six states to lose jobs—and Wisconsin’s job loss was the worst among that handful of losers.

In its latest jobs report, the Bureau of Labor Statistics reports that Wisconsin shed 23,900 jobs between March 2011 and March 2012. Wisconsin was the only state with a statistically significant percentage change in employment to report a net loss, the report stated.

The obvious point she was hoping to prove was that it was because of Act 10 that all these jobs were being lost, while hoping that few would actually take the time to look closely at what the BLS actually said.

First, Conniff is violating a rule of logic—“post hoc, ergo propter hoc”—which means, “After this, then because of this.” In other words, Conniff assumed that it was Walker’s budget bill that caused the alleged loss of jobs. In reality, however, Walker didn’t take office until January 3, 2011 and attempting to ascribe the perceived loss of any jobs to him from that moment is, at the least, not only being disingenuous but also ascribing miraculous powers to the executive branch in Madison!

Next, the alleged union-busting bill wasn’t passed until March 11, 2011 and any impact, positive or negative, wouldn’t have been felt or even able to be measured accurately until months later.

A review of that report from the BLS does, in fact, show that nonfarm payroll employment moved down from 2,754,500 in March 2011 to 2,730,600 in March 2012, a loss of 23,900 jobs. But she failed to mention that the BLS did a “once every ten years” population adjustment (based on the latest census) to its database in January 2012, which as a result makes a direct comparison between March-to-March impossible. What that report showed, which Conniff also failed to mention, was that unemployment declined in that same period from 7.6 percent to 6.8 percent, well below the national average of 8.2 percent. If Walker’s anti-union bill was somehow responsible for the alleged loss of those jobs, wasn’t it also responsible for the decline in unemployment as well? Conniff failed to say.

The BLS also reported that the total civilian labor force (including farm employment and government employment) in Wisconsin increased in the first three months of 2012 (likely a better time frame to measure any impact Act 10 might have on employment) from 3,054,600 in January to 3,064,200 in March (based on preliminary estimates), a gain of 9,600 jobs. Surely Conniff had access to that information as well, but found it inconvenient to mention it in her letter.

Drilling down into the BLS data even further, Conniff would have noted that, again using preliminary numbers for March, in the first three months of 2012 manufacturing jobs increased by 2,800, education and health services jobs increased by 2,900, and leisure and hospitality increased by 3,300. So much for the alleged “job-killing” impact Act 10 is having in Wisconsin.

So Conniff made three mistakes: one of an error in logic, one of ignoring history and the inevitable time delay between cause and effect, and the final one of selecting out data that contradicted her preconceptions.

What really happened? On his website, the Governor reminded his audience:

To make matters worse, the state faced millions in outstanding bills created by poor fiscal management in the past. Bills and fund raids totaling over $800 million had piled up. Wisconsin owed Minnesota a $60 million tax payment. An unconstitutional raid of $200 million from the Injured Patients and Family Compensation Fund by the previous administration had to be paid back. These bills were accruing interest every day.

And so his administration crafted the bill that, after the entire Democrat legislative contingent in the state Senate fled to Illinois to avoid facing a vote on it, became effective in June 2011. Included in that bill were provisions forcing most state employees to pay more for their pensions and health benefits, prohibiting government workers from collectively bargaining for anything other than pay raises or from demanding raises that exceeded the Consumer Price Index.

The bill also prevented unions from forcing members to pay dues through payroll deductions. It also contained some cost-cutting measures such as allowing health plans to be put out for bid in the private market, and, taken all together, represented a massive effort to rein in spending and bring the budget, then $3.6 billion over revenues, into line.

When the changes began to bite, and union officials were forced to make major reductions in staff because so many members decided to keep the dues in their own pockets instead of having them extracted to support the unions, the Wisconsin Service Employees International Union (Wisconsin SEIU) decided in November to push for the recall of Governor Walker. This was after previous attempts to stop the original bill from passing, to replace a conservative Wisconsin State Supreme Court Justice, and finally to recall enough Republican state Senators to regain Democrat control had all failed. As noted by author Alex Newman, they called for a recall “because the stakes are so high.” If Act 10 isn’t mitigated or eviscerated, other states just might catch the fever and pass “freedom from union” acts of their own.

The unions collected enough signatures for a recall, which is now scheduled for Tuesday, June 5. But things aren’t going well for the unions. Polls just last month showed Walker tied with his opponents but according to the latest Daily Kos/Public Policy Polling numbers, Walker now leads the field by four percentage points.

And the momentum going into the final weeks is all in the Governor’s favor. On April 23 he announced that savings from Act 10 reforms have already exceeded $1 billion and counting:

This is a great day for the hardworking people of this state who pay for the expenses of government.

I want to commend the local leaders of school districts, villages, cities, and counties who rolled up their sleeves and put our reforms to work for them. They are finding innovative ways to be more efficient while still maintaining and improving services.

This is just the beginning. We are turning things around, and this is a fantastic start.

What is notable is that nothing in the Governor’s bill was targeted directly to creating more jobs. Walker must have known that governments don’t have the power to create jobs in the private economy. What they can do is reduce regulations, cut spending, push back on union power and require union members to begin to pay at least part of their own way, and give business owners a chance to breathe, expand, and then hire.

What the BLS report does is show precisely what is to be expected when governments back off and allow the market economy to do what it always does best: adjust, shift, and react to an improved climate, begin to breathe again, and make investments in the future, including hiring.

Walker’s chances of surviving the recall vote in June just get better with each passing day, thanks to his Budget Repair Bill, Act 10.

BLS Collective Bargaining Conservative Consumer Price Index Democrat Economy Education Freedom Jobs Polls Republican Scott Walker SEIU Senate Spending Statistics Supreme Court Unemployment Unions War
This entry was posted on Wednesday, May 2nd, 2012 at 7:25 am and is filed under Economics, Politics. You can follow any responses to this entry through the RSS 2.0 feed. Both comments and pings are currently closed.
Many of the articles on Light from the Right first appeared on either The New American or the McAlvany Intelligence Advisor.