Big Losses for Taxpayers as Another Green Company Turns Rotten 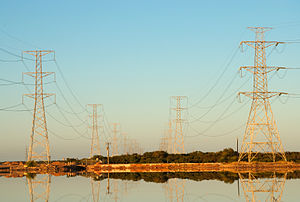 Beacon Power, the beneficiary of the endless flow of taxpayer guarantees emanating from the Department of Energy, went into bankruptcy in just over two years, leaving lawyers from the Justice Department crying foul.

On the surface the idea of developing flywheel energy storage capacity for utilities that would kick in during peak load periods and then recharge during slack times appeared to have merit. In fact, Beacon Power had invested more than $200 million in the technology since 1997, mostly from banks and private investors. But when Congress passed the American Recovery and Reinvestment Act of 2009 (ARRA), it became a rich source of funding with loan guarantees backed by the U.S. government and Beacon was one of the first to apply for some. In July of that year, Beacon received $43 million in guarantees to help fund construction of a 20 megawatt flywheel energy storage plant in Stephentown, New York.

It took just 28 months for Beacon to burn through its government-guaranteed loans and declare bankruptcy. Said Beacon’s CEO William Capp in October of 2011: “The current economic and political climate, the financing terms mandated by DOE [the Department of Energy], and Beacon’s recent delisting notice from Nasdaq [resulting from its share price dropping from $25 a share in late 2007 to under a dollar in 2011] have together severely restricted Beacon’s access to additional investments through the equity markets.”

During its reorganization under the bankruptcy laws, Beacon somehow was able to find a buyer of its assets: a private equity firm, Rockland Capital, who offered $30 million for everything and promised to restart the company. Lawyers for the Justice Department didn’t like the deal, knowing that the DOE loan wasn’t likely to get paid back. Victor Zhao filed a brief in bankruptcy court for the Justice Department saying that Beacon had wildly overestimated the value of its assets at some $68 million for the New York plant and another $28 to $45 million for “flywheel intellectual property” consisting of some 22 US patents and another 11 foreign patents, plus 23 more patents that are pending. Wrote Zhao:

Furthermore the deal Beacon cut with Rockland is intended to “siphon the overwhelming portion of the [company’s] remaining cash to pay their own professionals.” In response, Beacon said it was too late for the DOJ to complain: all the assets have already been liquidated under the purchase agreement with Rockland.

What appeared to be an idea with potential merit, it quickly succumbed to the temptation of government mandates and low-cost, no-risk financing under ARRA. Whether flywheel energy technology would ever have allowed Beacon to turn a profit remains unknown. The market for such an idea failed to materialize in time for Beacon to take advantage of it and begin to make a profit. The market always wins, despite efforts of government officials with other people’s money to spend, to decree otherwise. Simply declaring that green energy ought to work, should work, and will work given enough taxpayer “investment” isn’t good enough. Only the market can make such a declaration. It’s too bad that Beacon and the taxpayer had to learn that lesson once again, thanks to the experts at the Department of Energy.

Bankruptcy Department of Energy Department of Justice Energy Stimulus Bill Technology
This entry was posted on Wednesday, April 18th, 2012 at 4:42 am and is filed under Economics. You can follow any responses to this entry through the RSS 2.0 feed. Both comments and pings are currently closed.
Many of the articles on Light from the Right first appeared on either The New American or the McAlvany Intelligence Advisor.